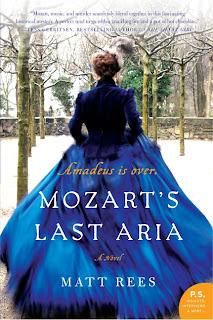 I have to admit that I agreed to review this book because of the cover. This is one that I want to frame and put on my wall. Sure, the plot sounded interesting as well, but I have never been a big classical music fan. However, between the cover and the lure of a murder mystery I could resist opening these pages.

Mozart's Last Aria tells the story of Mozart's death, his musical career, family drama, and his connections to the Masons. I have long been fascinated with the history of the Masons and their appearance in fiction and nonfiction texts. The author's note at the end of the novel reveals that the plot was inspired by real events in Mozart's life and that he did have a connection to the Masons. I never knew much about the composer so reading this book was quite educational and caused me to want to know more about the man.


I also really liked the "whodunit" aspect of this read. Mozart's sister, Nannerl, arrives in Vienna to find that her brother's death is somewhat suspicious. Mozart confided in his wife and friends that he believed he had been poisoned shortly before his death. She soon finds that his death may be connected to the Masons; Nannerl starts to piece together the last few months of her brothers life to try to track down his killer. She refuses to believe that the great Mozart left the Earth via natural causes. The fact that nobody knows for sure what caused Mozart's death adds a bit of magic to this book - his demise in this book could very well be what actually happened.

Another really interesting aspect of the book is the way in which it unfolds. The beginning shows Nannerl on her deathbed as she hands over her diary to her nephew, Wolfgang, the youngest son of the famous composer. Within its pages, lurk family secrets that will show the young Wolfgang what really happened to his father.

Matt Rees has created a solid piece of historical fiction that showcases his attention to research and a love of music. You can't help but feel the amount of time and devotion that went into crafting this novel. Rees writes in beautiful, sweeping prose and transports the reader to Vienna's streets in 1791. I learned so much and enjoyed the story as well. I highly recommend this book to fans of historical fiction, mysteries, and classical music.

Award-winning author Matt Rees takes readers to 18th century Austria, where Mozart’s estranged sister Nannerl stumbles into a world of ambition, conspiracy, and immortal music while attempting to uncover the truth about her brother’s suspicious death. Did Mozart’s life end in murder? Nannerl must brave dire circumstances to find out, running afoul of the secret police, the freemasons, and even the Austrian Emperor himself as she delves into a scandal greater than she had ever imagined. With captivating historical details, compelling characters, and a real-life mystery upon which everything hinges, Rees—the award-winning author of the  internationally acclaimed Omar Yussef crime series—writes in the tradition of Irvin Yalom’s When Nietzsche Wept, Louis Bayard’s The Pale Blue Eye, and Phillip Sington’s The Einstein Girlto achieve the very best in historical fiction with Mozart’s Last Aria.