Book Review: Only Everything 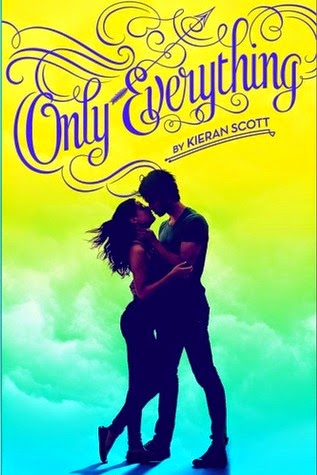 Only Everything
By: Kieran Scott
Published By: Simon & Schuster Books for Young Readers
Release Date: May 6, 2014
Page Count: 336
Buy It: Amazon, Barnes & Noble, or Indiebound
Source: ARC Provided by Publisher
Audience/Genre: YA Romance

When I read the synopsis for this book, my immediate thought was that it would either be really good or really bad. Come on - Cupid masquerades as an Earth-bound teenage girl, stripped of her powers and responsible for playing matchmaker for humans in order to lift her banishment from Olympus and be able to see her true love again? And I thought the possibility of it being very, very bad was the most likely of the two. But oh, I was wrong - so very, very wrong! I love this book, like fangirling over Kieran Scott accepting my Goodreads friend request love it. ;)

Because Only Everything has a goddess as it's protagonist, comparisons to Rick Riordan's Percy Jackson series are inevitable, so I'll get them over with right away. Yes, this is similar, sort of - if 1) Percy was a goddess and 2) was an older, (even more) smart-mouthed, incredibly spoiled, wickedly sarcastic teenage girl who is 3) thrown into this millennium after rescuing Orion from the heavens (yes, that Orion) and 4) had the gift of seeing the absolute absurdities in human behavior.

That last one, the ability to see how absurd our behavior is, is one of the reasons I love True Olympia (Cupid/Eros's Earth pseudonym) and one of the reasons I love this book. As I read about True's first day at school, I had the distinct impression that Kieran Scott had spent some time standing outside of MY 10th grade classroom taking extensive notes, because the descriptions of high school hallways and cafeterias rang SO TRUE. And because she's a stranger in a strange land, True's wit is both sarcastic and naive, an odd combination that endears her to the reader time and time again.

But the thing is, True isn't even really the main character. She is the catalyst (and sometimes obstacle) to get the ball rolling for whatever unsuspecting human she's dedicated herself to matching up with their true love. Her intentions don't begin honorably, but they evolve throughout the course of the book until she really does care about us misguided and flawed humans. In the case of Only Everything, the unsuspecting human is high school transfer student, Charlie. True's attempts at add-water-and-stir matchmaking are misguided and end in predictable debacles and misunderstandings, but it is her reaction to them and undeterred commitment to making a true love match that make the book enjoyable. And Charlie. *sigh* Charlie is Book Boyfriend post-worthy. He's dreamy, and flawed, and normal, and unique, and funny, and serious - and everything I like in a male lead. Just like True is everything I like in a female lead, or any lead for that matter.

Last Word: Only Everything is a fun read that sets itself apart from the usual YA fare with great writing, keen observations about human behavior, and a variety of characters you can't help but love.

High school romance is tough—even for a bona fide love goddess. Can Cupid succeed as a mortal matchmaker?

When Eros (aka Cupid) is expelled from Olympus for defying Zeus after falling in love with Orion, she is banished to what she believes to be hell. We call it New Jersey. If she ever wants to go back to the comforts of her old life, she will have to find love for three couples—without using her powers.

Eros, now calling herself True, immediately identifies her first project in Charlie and believes finding him love will be a piece of cake. Charlie is new at school and eager to break out of his old image of band geek, so it’s lucky for him when he falls in with the right crowd on his first day. But music is still his passion. That is, until he meets Katrina...

Katrina is floundering after the death of her father and takes refuge with a boy who, while not entirely supportive, will be there when she needs him, unlike her mother. Too bad True thinks any girl Charlie talks to is perfect for him. Can she get out of her own way and help Charlie and Katrina connect, or will she be stuck in New Jersey forever?