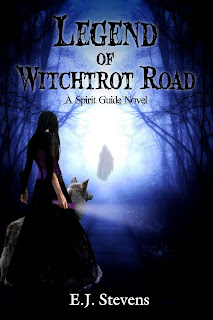 As many Reading Lark followers know, I love the Spirit Guide series. These reads are fast, quirky, and inventive. I have grown to love the characters and always look forward to spending time with them. E.J. Stevens is also an incredible Indie author who does so much for the writing community on her blog. When she contacted me about reviewing an ARC for the newest installment in the series, I jumped at the chance.

Legend of Witchtrot Road picks up almost immediately where Spirit Storm left off. Yuki has managed to survive Samhain and all the spirits running loose with the help of her friends and a powerful amulet. Now she just has to survive high school - which is a lot harder than it may sound considering Yuki is still battling the J team, a pair of football thugs, who aren't very accepting of alternate lifestyles. They are convinced that Yuki is a witch who is practicing dark magic. When the quarterback, Dylan Jacobs, dies in a motorcycle accident on Witchtrot Road, the J team immediately assume Yuki is behind the death and vow to get revenge. Also, Yuki can't stop smelling motor oil and she is convinced that Dylan's spirit is haunting her. She and her friends must put Dylan's soul to rest by finding out exactly what happened the night he died.


The sections of the story revolving around the football team's thirst for revenge were really hard for me to read. This installment alludes heavily to the Salem Witch Trials so I liked how Stevens mirrored the hysteria and finger pointing of that era with Yuki's story. However, it has always been hard for me to read scenes that involve bullying. As a kid, I had my fair share of experiences with mean kids and those moments can scar you for life. I was lucky enough to never have to deal with violet issues, but Yuki is not so lucky. I was terrified for her in those moments and I couldn't believe that not one adult in the school saw or heard anything. Furthermore, any time Yuki is being taunted by the boys, I never see any school officials intervene.

This installment really focuses on Yuki and her need to help spirits find peace. In past books, there has been more of a focus on Cal and the pack. You still get to deal with pack drama in this one, but it's not the focus, which was a nice change. Like relationships, I think series that have two main characters with interesting traits should be balanced. I didn't feel like Cal's plot was trying to overshadow Yuki's in this one.

I wasn't able to give this one a five rating because of the ending. I felt like it was too rushed and too easy. Everything seemed to be tied up nice and neat with a bow. There were some serious issues that arose and I just don't feel like realistically they would have been handled so easily.

Legend of Witchtrot Road also left me with so many questions. Why did Gabriel choose now to come back? What's going on with Simon and Emma? If Cal and Yuki get married and have kids, will they be werewolves who smell the dead? What is Yuki going to do about the amulet? Why can Yuki suddenly see the outlines of spirits after the car accident? The list goes on and on. I am holding out hope that all of these answers will come in future books. For now, I'm anxiously awaiting book number four.

This series isn't one that is highly polished and perfect in every way, but that doesn't bother me because I am so invested in these characters and the story lines. I also go into these books knowing that I am not going to get the highly edited sort of book I would get from a major publishing house. I often find it frustrating that so many readers won't take a chance on Indie works when there is so much good stuff lurking behind non-traditional publishing. The wonderful thing about reading is there is something for everyone. So, if you're looking for great characters and interesting story lines, you should give the Spirit Guide series a try.

One Last Gripe: My biggest complaint was with a typo. The character Gabriel was often spelled Gabrielle. This would throw me off and disrupt the flow of my reading. I am hoping that this issue was fixed before publication. (EDIT: This was confirmed by the author that it was only an issue in the ARC.)

My Favorite Thing About This Book: the characters

First Sentence: I heard the harsh, grinding creak of a ship's hull straining against stormy seas just as I felt the vertiginous tilt and roll of the waves beneath me.

Surviving agitated ghosts, irritated witches, angry werewolves, and the horrors of high school has never been so hard.

The night of Samhain may be behind them, but Yuki and her friends have only begun to face the challenges of their paranormal gifts. Tensions are rising--in the pack, at school, and within their tightly knit group of friends.

The tragic death of Wakefield High student Dylan Jacobs has emotions boiling over. The J-Team, Yuki's arch nemesis, have turned the entire football team against her. They claim that Yuki is a witch and blame her for the death of their fellow teammate. Will Yuki be able to solve the mystery of Dylan's death, and the legend of Witchtrot Road, before tempers flare and things turn violent?

Emma is the friend that Yuki turns to when things get tough, but she's been behaving strangely. Emma has been acting distant and seems to be coming down with a mysterious illness. What will Yuki and her friends do if their healer is truly sick?

Calvin has become Alpha and wants the best for his pack. He is a dedicated and compassionate leader willing to do anything for the good of his people, but will Cal be able to hold the pack together when a fiery, young werewolf comes seeking revenge?

Simon may still be a roguish playboy, but he is taking his role as Calvin's second in command deadly serious. Will Simon be able to focus on his pack duties when he is forced to face his dark, emotional past?