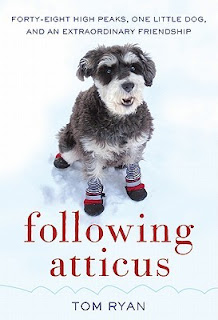 I was originally drawn to this book for two reasons: the title and the fact that Atticus is a miniature schnauzer. In my teen years, after my childhood dog was killed by a neighbor's dog, my grandparents decided that in order to get over the grief of losing our first beloved pet that we needed a new puppy to shower with love and attention. I can still remember going to the pet store with my sister and brother to try to find that special furry someone. All three of us fell in love with a miniature schnauzer who appeared to be the runt of his litter. The little guy was so tenacious in his attempts to knock the puppies out of his way as they all vied for a prime position at the water bowl. There was just something about him that stood out and we knew he was the next addition to our family. We named the little guy Pacey and he was a treasured part of our family until his death a few years ago. This breed will always be special to me so I couldn't wait to read a book where one was featured prominently. Also, my favorite novel of all time is To Kill a Mockingbird by Harper Lee. How could I not pick this book up?


I didn't have super high expectations for this one before I started it. I figured it would be good, but it would just be a story about a man and his dog hiking. I never expected this book to become one of my favorites. I'm not typically a nonfiction reader. The few times that I pick up nonfiction for pleasure reading usually result in me curling up with a Stephen Ambrose book or some other historical piece. Memoirs have never been my thing, but there is something compelling about the way Tom Ryan tells his story that made me rethink how I approach this genre. There is far more than just a man and his dog hiking going on in this book. Putting this down to interact with family and friends was a chore. I wanted to lose myself in this book every chance I had.

Tom and Atticus are inspiring. These are two of the most unlikely mountain climbers I could think of and yet their determination and friendship allows them to do remarkable things. The itch to get out into nature keeps pestering me and I think that I am going to give hiking a chance. I've never really been a nature girl, but I love how Tom describes the hikes as internal meditations. Tom mentions, "There is a point in climbing when you get quiet and are enveloped by the solitude. The hike turns into a walking meditation and becomes Zen-like. You stop trying so hard, and your stride falls into place with your heart and lungs. Your mind follows suit" (pg. 72). I am constantly on the go - always stressing or working on something. The word relax is not in my vocabulary. I think giving myself a positive outlet like hiking would not only get me exercising, but would also be a healthy way to channel my frustration, stress, and anxiety. It would also be a great way to bond with my own dogs - although we would not be doing huge mountains like these two tackle. One of my favorite lines from the book supports my sentiments when it states, "In the mountains Atticus became more of what he'd always been, and I became less - less frantic, less stresses, less worried, and less harried" (pg. 58). I am my own worse enemy most of the time; I convince myself that I can't do things and then talk myself out of even trying. This book has lit a fire within in me. It's hard to say "I can't" when reading a tale like this one. If Atticus can do what shouldn't be able to be done, why can't I?

Following Atticus is an inspiring tale of adventure and friendship. My dogs are truly important to me and it was nice to see someone else who viewed his dog as a friend. I loved learning more about the relationship between this writer and his dog. It was also interesting to learn more about hiking and the White Mountains. I have never visited New England, but this is one of those books that makes you want to get up and go. It is my sincere hope that I will make it there someday. In the mean time, I will continue reading about the adventures of Tom and Atticus on their blog.

One Last Gripe: I don't have one this time

My Favorite Thing About This Book: I loved feeling inspired and hopeful about things I can do to help me slow down and appreciate life

First Sentence: I have a new favorite photo.

Middle-aged, overweight, and acrophobic newspaperman Tom Ryan and miniature schnauzer Atticus M. Finch are an unlikely pair of mountaineers, but after a close friend dies of cancer, the two pay tribute to her by attempting to climb all forty-eight of New Hampshire's four-thousand-foot peaks twice in one winter while raising money for charity. In a rare test of endurance, Tom and Atticus set out on an adventure of a lifetime that takes them across hundreds of miles and deep into an enchanting but dangerous winter wonderland. Little did they know that their most difficult test would lie ahead, after they returned home. . . .
At the heart of this remarkable journey is an extraordinary relationship that blurs the line between man and dog, an indelible bond that began when Tom, following the advice of Atticus's breeder, carried the pup wherever he went for the first month of their life together. "Following Atticus" is ultimately a story of transformation: how a five-pound puppy pierced the heart of a tough-as-nails newspaperman, opening his eyes to the world's beauty and its possibilities. It was a change that led to a new life among the mountains; an unforgettable saga of adventure, friendship, and the unlikeliest of family; and an inspiring tale of finding love and discovering your true self.