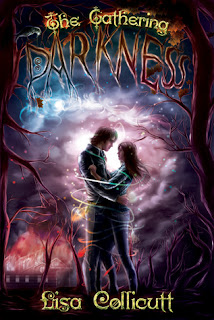 Witches and Fairies and Reincarnation...oh my!  Lisa Collicutt cleverly blended all these supernatural phenomena into a story that I couldn't help but fall into.  It was equal parts creepy, equal parts romantic and equal parts sometimes-a-bit-too-far-fetched-mystery.

Brooke Day has been brought by her parents to live with her Aunt, Uncle and cousin in creepy Deadwich, Massachusetts, in an attempt to set her back on the straight and narrow after getting caught drinking (underage) with her boyfriend (of which, she didn't actually partake but no one believes her).  It was apparently the last straw for her parents.  As it turns out, the thought of living in creepy Deadwich terrifies Brooke.  She has spent some time in Deadwich in the past and the town basically just creeps her out and plagues her with creepy nightmares whenever she stays there.  No amount of pleading with her parents changes their minds so she accepts her fate and tries to the make the best of it. Once settled, she learns she will be working after school at the creepiest place on earth...the Ravenwyck Inn...much to her horror. However, tempering the high-creep-factor is Marcus...the boy she is drawn to at first sight (don't roll your eyes...there's a perfectly good explanation!)

My using the word creepy a lot is purely intentional.  There is a lot of awesome creepiness in this story...everything from Ravenwyck's foreboding facade  with its sky-high dormers topped with metal ravens, to the creepy interior, to creepy Maggie who runs the Inn, to creepy pictures that came alive, to frightening nightmares, to once-friendly friends who change into sinister enemies.  Definitely creepy...the author succeeded in this regard!

I quite liked Brooke as the protagonist, but will admit I had some trouble connecting with her at first.  Through her trials and tribulations, I found her to be someone I wanted to root for.  Having said that, she still made some decisions that left me shaking my head...she reacted in ways that I wished she hadn't...and maybe she was a little slow on the uptake sometimes...but she's 16/17...and I've read about enough heroines who were not perfect to cut her some slack.

Marcus is the boy she has a supernatural connection with that escalates as the story unfolds.  Yes, there is insta-love happening, but there was a supernatural explanation for it, which I could buy into.  Marcus, of course, is handsome and popular.  His protectiveness of Brooke was swoon-worthy...and their chemistry was delicious and sweet.  His brother Evan, who also was into Brooke, seemed a little flat to me, but at the same time, I was a bit disappointed he wasn't more a part of the story than he was...perhaps with more air-time, he might have become more dimensional for me.

I quite liked some of Brooke's new friends and was glad that she had some that stuck in her corner when some of them turned away from her and became downright hostile (all of which is explained as the story pushes forward).

What can I say about Maggie without divulging too much?  You will love to hate her?  She's downright creepy?  Yes...that's good enough!

I felt the story really pulled me in despite some of it feeling a bit contrived and predictable.  Some explanations were a little too forced...forced like when you can't find the right puzzle piece so you force something close into the open space because it's convenient.  But at the same time, the story itself was highly imaginative and I have to give kudos to the author for blending it all together and still making it all relatively plausible for a paranormal/fantasy story.

I did like the fact that The Gathering Darkness seemed to be a stand-alone novel...there was resolution and I was satisfied with how it ended.  I'd like to thank Netgalley and Curiosity Quills Press for the opportunity to read this story in exchange for my honest review.   And it might be worth mentioning that despite the cartoonish-cover, I think this book would be more suitable for older teens due to a not-overly-graphic but intimate scene that was witnessed.

Overall, The Gathering Darkness was an enjoyable read!

They say "third time's the charm", and for sixteen-year-old Brooke Day, they had better be right. She’s been here before, twice in fact, and an evil demon-witch wants her dead a third time.

When Brooke is forced to leave Boston for the small town of Deadwich, she thinks her life is over. Before long, her new friends start acting strange—downright evil. But worse than that, nightmares she’s had her whole life become reality.

Enter Marcus Knight; popular, hot, and the only person Brooke can trust. Not to mention, they’ve shared the same nightmares.

With the discovery of an ancient Celtic amulet, Brooke and Marcus unravel the secrets of her past, which reveals the key to her future.

As the equinox approaches:

Darkness and light merge for the first time in a century.