Be sure to check out the giveaway details at the end of this post. 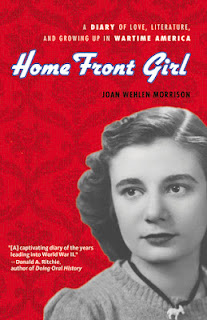 Offering a fresh, new voice chronicling everyday life during the Great Depression and the lead-up to World War II, Home Front Girl is the real life diary of an astute teenage girl coming of age during an extraordinary time in world history. As she considers the daily headlines surrounding major historical events such as the bombing ofPearl Harbor, Hitler’s rise to power and more with insight beyond her years, she also remarks on the latest hairstyles and fashions, friendships and adolescent heartbreak with humor and wit. Joan’s own photos, poems and sketches help to further bring the pages of her journal to life. Joan’s innocent yet precocious tone will surely remind readers of Anne Frank and her diary entries.

“Hitler speaks to Reichstag tomorrow. We just heard the first casualty lists over the radio. . . . Lots of boys from Michigan and Illinois. Oh my God! . . . Life goes on though. We read our books in the library and eat lunch, bridge, etc. Phy. Sci. and Calculus. Darn Descartes. Reading Walt Whitman now.”

This diary of a smart, astute, and funny teenager provides a fascinating record of what an everyday American girl felt and thought during the Depression and the lead-up to World War II. Young Chicagoan Joan Wehlen describes her daily life growing up in the city and ruminates about the impending war, daily headlines, and major touchstones of the era—FDR’s radio addresses, the Lindbergh kidnapping, Goodbye Mr. Chipsand Citizen Kane, Churchill and Hitler, war work and Red Cross meetings. Included are Joan’s charming doodles of her latest dress or haircut reflective of the era. Home Front Girl is not only an entertaining and delightful read but an important primary source—a vivid account of a real American girl’s lived experiences.

This giveaway is open to US residents only. No P.O. Boxes!
You must be 13+ years of age to win.
The winner will receive a copy of the book from Independent Publishers Group.