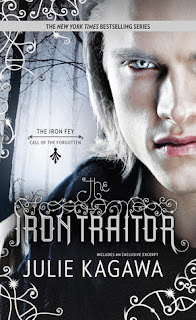 
My Review for The Lost Prince can be found here.

I never thought I'd ever…EVER… want to throw a Julie Kagawa book against the wall...The Eternity Cure came so close...but this…THIS…nearly left my fingers.  Not because I hated it but because I loved the story SO much and yet, in the last two pages of the book, Julie proceeded to tear my heart out and eat it for dinner.  Yes…the dreaded cliffhanger that Julie dreamed up in this one was a doozie.

So…the question that many Iron Fey fans must be asking themselves now…shouldn’t I just wait to read this when the last installment comes out so I don’t have to endure the agony of waiting a year to find out what happens next?  I would answer that question with a resounding and emphatic NO!!!


Why, you say?   Well, for one, you would be missing out on Julie’s awesome story-telling for another year.  And the journey to the end of this installment is full of everything we all love in Julie’s story-telling…action, adventure, romance and wonderful characters.  It is totally worth enduring the cliffie!  I swear!

It’s no secret that I am a huge fan of Julie Kagawa and her stories.  In my mind, they’re faery-tales for ‘big kids’.  And in The Iron Traitor, Julie continues to write pure epicness.  Along with the worlds and adventures we get to experience through her highly imaginative writing, her characters are the driving force for me…characters who must go through SO much STUFF, and through these experiences, they grow in the most beautiful and realistic way in a non-realistic, full-on fantasy story.  Maybe they don’t always grow in the direction you want them to – initially anyway – but they grow, which is one of Julie’s greatest trademarks.

I think you’ll agree that Julie wrote fantastic character arcs for Meghan and Ash in the previous series, and the characters in The Call of the Forgotten are no different.  If you recall in the The Lost Prince, Ethan had not a chip on his shoulder, but a HUGE boulder.  So angry with the fey for ripping apart his family, he perhaps drew some misconstrued conclusions over the years.  As truths came to pass in this installment, and his feelings for Kenzie deepened, we saw Ethan soften just a bit while still staying true to his core.   And I have to say that I LOVED seeing this side of Meghan’s ‘baby’ brother.   We got glimpses of what Ethan might have been like had he not had the fey so intricately woven into his life.  Who knew he had a sense of humour and can be incredibly sweet and sexy rather than always brooding and angry?

Of course, Kenzie had a huge role to play in that.  She provided another perspective in which to view the fey…and life.  She continued to be a breath of fresh air, and the voice of reason in this story.  I adored her character…her stubbornness (or some would say persistence) despite her fragile physical nature.  Her devotion to Ethan and who she considers her friends earns her huge favourite character marks in my books!  It’s no wonder Ethan’s feelings for her are getting exponentially stronger.

We also got to know a bit more about Annwyl.  Definitely one of the kinder fey-folk we’ve come to know in Julie’s books…she reminded me of another sidhe who, a long time ago and before Meghan, caught the eye of a certain icy prince; strong in mind and determination but gentle in heart and personality.

So…perhaps was there a little bit of history repeating itself or the past influencing present events?  YES to both!  Lots of ties to the previous stories and their connections were stronger than ever before.  I somehow knew in the back of my mind that certain things that happened in Meghan & Ash’s story might influence the present…and how!   Were there consequences…you bet!

Not everyone is going to like Keirran in this installment…he perhaps came across as a bit reckless – that was no secret as you recall from the previous book – but I would argue that he was more desperate than anything else.  He so desperately wanted to do the right thing and save those he loved from harm…but in his quest…things didn’t always turn out the way he had planned.

Keirran, to me, is a good mixture of Meghan and Ash with a bit of Puck’s mischievousness thrown in for good measure.

Not everything was as it seemed as some answers (not all) were finally revealed pertaining to why Meghan and Ash decided to keep Ethan and Keirran apart.  We always suspected it had something to do with the Oracle’s prophecy foretold in the earlier Iron Fey books.  But more puzzle pieces were turned upright in this installment, revealing some of the mysteries, but not all.

Iron Fey fans will also be happy to know that Meghan, Ash, Puck and Grim all continue to participate in this story.  And I’m still swooning over Ash – especially in his role as a father.

And so…as I closed the book – and nearly flung it against the wall – I was left with my head spinning – trying to process what just happened and try to extrapolate what might come to pass from that mother of all cliffhangers.  I’ve got my theories…most of which, I’m hoping for.

But I repeat…DO NOT wait to read this for fear of that nasty cliffie.  You will be missing out on some awesome story-telling…and you just have to have faith that Julie will make it all turn out right in the end.  Or at least, we can hope her editors, once again, are working to convince her of that much.

I’d like to thank Julie Kagawa, Harlequin Teen and Netgalley for the opportunity to read The Iron Traitor before its release!  You can bet I’ll be rereading this one throughout the year!

IN THE REAL WORLD, WHEN YOU VANISH INTO THIN AIR FOR A WEEK, PEOPLE TEND TO NOTICE.

After his unexpected journey into the lands of the fey, Ethan Chase just wants to get back to normal. Well, as "normal" as you can be when you see faeries every day of your life. Suddenly the former loner with the bad reputation has someone to try for-his girlfriend, Kenzie. Never mind that he's forbidden to see her again.

But when your name is Ethan Chase and your sister is one of the most powerful faeries in the Nevernever, "normal" simply isn't to be. For Ethan's nephew, Keirran, is missing, and may be on the verge of doing something unthinkable in the name of saving his own love. Something that will fracture the human and faery worlds forever, and give rise to the dangerous fey known as the Forgotten. As Ethan's and Keirran's fates entwine and Keirran slips further into darkness, Ethan's next choice may decide the fate of them all.