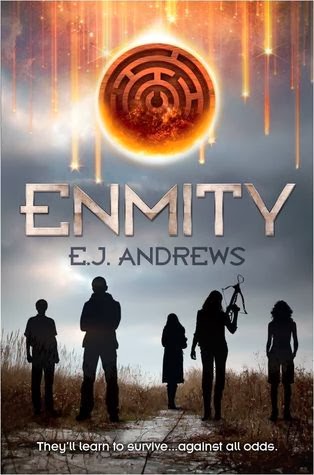 Sixty years after a solar flare wipes out most of the world’s population, a group of ten teenagers are kidnapped and taken to a secret location where they are trained in hand to hand combat and weaponry. They are being prepared to fight The Cain, a rebel faction opposing the leadership of President Collins. Each of the teenagers has been chosen for a reason, and each has secrets that they are not keen for the group to know.

The story is told through the alternating viewpoints of Nate and Hermia, two very different characters with more in common than they realize. The teens resist their fate at first, but when the political situation is explained to them, they choose to participate willingly. The cost will be huge, and their chances of success are small, but in order to secure the future, they must succeed.


To me, it seemed like this book wasn’t entirely sure what it wanted to be. The story actually starts just before the solar flare, and for me this was the most interesting part of the book. The story I wish was told was who survived and how, and what happened thereafter, but the author skips ahead 60 years with no further explanation, and the reader is left to work out the rest for ourselves. There are two romantic storylines running along in parallel, but for me they didn’t sit well within the rest of the story.  The teenagers seem to conveniently forget about their kidnappings and just go along with things. Nate loses his family, but barely stops to mourn them, and doesn’t try to retaliate.

For me there was too much left unexplained. Civilization is all but destroyed, but they have been able to develop a serum that will cure all disease, including mental illness. Genetic enhancements can be made to IVF embryos for reasons that I won’t go into lest I spoil the story. All these advancements, and still the fate of the world hangs on the actions of a handful of teenagers. There were just too many leaps in logic for me.

My problems with this book were all with the plot development, not with the writing itself, which was enjoyable. While I don’t think I’ll seek out the sequels, I would give another book by this author a go.

If you’re into post-apocalyptic, semi-dystopian fantasy then give it a try.

Love vs Life.
Good vs Evil.
War vs Warfare.

Which would you choose?After a solar flare wipes out most of the world’s inhabitants, it leaves behind nothing but a desolate earth and a desperate population. Existence is no longer a certainty. And with factions now fighting for the power to rule, people start to become reckless with their lives. The world has become a dangerous place.Amongst the ensuing chaos, Nate and Hermia — two victims of the new world order — are taken against their will to The Compound. Joined by eight other teenagers all chosen for a specific reason, Nate and Hermia are forced to train as assassins to overthrow the current president and make way for a new leader of the free world. Here, they learn to plan, fight, and most importantly... to survive.Except, despite the casual cruelty of their new existence, both Nate and Hermia — two very strong but very different people — begin to form fragile bonds within the group. But they soon realize their happiness is short lived...because their training is just the beginning.A war awaits...regardless of how ready or willing they may be.