Skip to main content
Labels
Posted by Reading Lark May 20, 2014 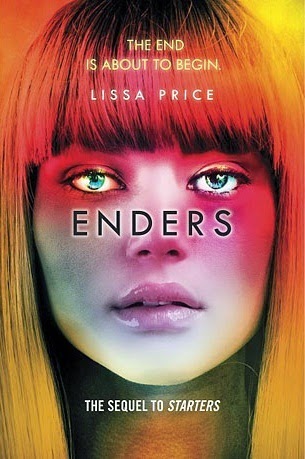 If I could sum up Enders in one word, it would be "convenient". Everything that happened was really handy, and happened just at the right time.

Why was it so hard to believe? Callie was a normal scrounging Starter, and she got hooked up at Prime to be a Metal - so people could inhabit her body. She is utterly normal, but all the other Metals have badass skills like crazy gymnastic abilities and self-defence etc. Yet Callie is the one that is chosen for a special chip, so she can kill someone. Maybe it was her marksmanship - but I sure wouldn't have given her the chip! I also found myself rolling my eyes so much at all the times when she needed something and it would appear. A safe place where she couldn't get scanned? Oh look! A handy underground market! (Wouldn't that have been useful earlier on when she was on the run and starving...) I can't go into this any more because it annoyed me too much.


My next issue was that she and Hyden (whose name is FAR too much like hymen) barely know each other, and all of a sudden she's kissing him? But he's in someone else's body... creepy and surprising. I didn't feel that love connection AT ALL, and I was kind of waiting for her to get with the real story and realise she loved Michael. Slight spoiler... that didn't happen at all. Hyden was also handily a complete genius with an awesome lair, which was completely safe, until it wasn't.

I just couldn't get into this. I ploughed on to the end, because I thought Starters was great, but I found myself wishing that I had just left the story there. I feel very sad that the writing dipped so much in quality to this book from the last. I won't be recommending this to anyone I'm afraid - in fact, I'd recommend skipping it! Final nail in the coffin - I really disliked the cover too.

Someone is after Starters like Callie and Michael—teens with chips in their brains. They want to experiment on anyone left over from Prime Destinations—Starters who can be controlled and manipulated. With the body bank destroyed, Callie no longer has to rent herself out to creepy Enders. But Enders can still get inside her mind and make her do things she doesn't want to do. Like hurt someone she loves. Having the chip removed could save her life—but it could also silence the voice in her head that might belong to her father. Callie has flashes of her ex-renter Helena's memories, too . . . and the Old Man is back, filling her with fear. Who is real and who is masquerading in a teen body?No one is ever who they appear to be, not even the Old Man. Determined to find out who he really is and grasping at the hope of a normal life for herself and her younger brother, Callie is ready to fight for the truth. Even if it kills her.