Skip to main content
Labels
Posted by Reading Lark May 23, 2015 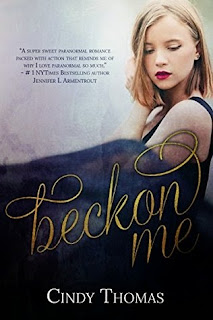 Full disclosure time: Cindy Thomas is friends with several of my fellow Larks, but is unknown to me.

Karina is left injured and heart sore after surviving the shooting that killed her best friend, Rainey. She has not, however, been left alone. Rainey’s soul did not cross over into the afterlife as it should, and she’s now haunting Karina. Unsure what she can do to help, Karina returns to College and does her best to get on with her life. She makes a new friend in Gabby, who has just transferred, and enjoys flirting with Eli, the mysterious guy next door. But Eli is not an ordinary guy – he is a Beckoner, and Karina can become one, too. Becoming a Beckoner will mean giving up a normal human life, but it’s the only way to save Rainey’s soul from the evil Ceptors and allow her a peaceful afterlife.


Cindy Thomas has created a great page turner. I was eager to learn more about the Beckoners and what it means to become one. The paranormal elements are great, and I am eager to learn more in the next book. For me there seemed to be a few logical gaps, but I’m hoping the sequel will fill them in a bit more. The ghosts and ceptors are satisfyingly menacing, and the Beckoners are complex and mysterious.

Karina is a great character. Brave and self-sufficient, she doesn’t rely on others saving her. Although a victim in the truest sense, she doesn’t act it. She is a complex and proactive heroine.

Eli I was slightly less impressed with. He blows hot and cold and messes Karina around a bit, but the reasons for this are explained later on in the story and I still wanted Karina to end up with him. By NA standards the romance is tame, but I still found it compelling.

As a self-published debut this is an impressive effort and I look forward to reading the sequel and discovering more about the Beckoners.

Everything nineteen-year-old Karina Mitchell knows about death changes the instant that she and her best friend, Rainey, are shot. For one, souls don’t die. They cross over. Only, Rainey’s soul hasn’t, and her ghost is hell bent on haunting Karina. When Karina begins her sophomore year of college and moves into the apartment that she was supposed to share with Rainey, she learns a few shocking truths from her mysterious and gorgeous blue-eyed neighbor, Eli. One: Karina has been chosen to become a Beckoner—an immortal conduit of the dead who helps safely guide souls to the other side. Two: She’s the reason that Rainey’s soul can’t cross over—Rainey followed her back from death and missed her window to be at peace. Three: Eli is hot. As in swoon-worthy, to-die-for, will-make-you-forget-yourself hot. And it turns out, Eli is a Beckoner, too. Despite her attraction to Eli, the decision to become a Beckoner isn’t an easy one—it would mean giving up her own mortality … her own soul. But if she doesn’t, her best friend will be left to suffer an eternity at the hands of the evil Ceptors, dark creatures that feed on the souls left behind. After all, it’s her fault Rainey is haunting her. Time is running out, and Karina needs to decide: Are love and loyalty worth sacrificing her soul?