"Do you ever wish you would have named your blog something different?"
Andrea: Nope - I think our name fits us perfectly. I am in love with our little birdies. I also really like how a lark can be a bird or fit into one of the following definitions:
–noun
1.

innocent or good-natured mischief; a prank.
3.

something extremely easy to accomplish, succeed in, or toobtain: That exam was a lark.
Source
Tevya:
Nope, I love our name. I like it even better than our original name. (We had another name picked out that we couldn't use because it had been copyrighted.) It fits us.

Share your current fave television show! Tell us a bit about it...

Andrea:
I am a Supernatural junkie! Dean Winchester is my favorite character, but Sam is a close second. I highly recommend this series to anyone who is a lover of the paranormal. It has just the right balance between humor, creep factor, and yummy boys. What's not to love about that? So here's the Supernatural scoop: 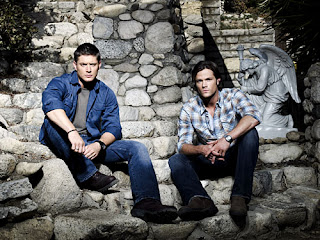 Returning for its sixth season, this haunting series follows Sam and Dean Winchester, two brothers bound by tragedy and blood to their dangerous, other-worldly mission. This past season, Dean and Sam faced their toughest foe yet: the Devil himself. As the Apocalypse raged on around them, the brothers, aided only by a dwindling band of fellow hunters and rebel angel Castiel, sought a way to stop Lucifer and save the planet. Ultimately, they discovered a way to force Lucifer back into Hell and end the Apocalypse-but at tremendous cost: Sam's life.
Season 6 will be a season of mystery and shadow. Heaven and Hell have been left in complete disarray since the apocalyptic events of Season 5. And now, monsters, angels and demons roam across a lawless and chaotic landscape. And so Dean Winchester, who has retired from hunting and sworn never to return, finds himself being pulled back into his old life -- pulled back by none other than Sam Winchester, who has escaped from Hell. The two reunite to beat back the rising tide of creatures and demon-spawn, but they quickly realize that neither are who they used to be, their relationship isn't what it used to be, and that nothing is what it seems.
The series stars Jared Padalecki as Sam Winchester, Jensen Ackles as Dean Winchester and Misha Collins as Castiel. SUPERNATURAL is from Warner Bros. Television in association with Wonderland Sound and Vision, with executive producers McG ("Charlie's Angels," "The O.C."), Eric Kripke ("Boogeyman"), Robert Singer ("Midnight Caller"), Sera Gamble, Ben Edlund, and Phil Sgriccia.