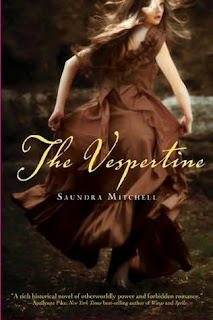 The Vespertine
By: Saundra Mitchell
Published By: Harcourt Children's Books
Release Date: March 7, 2011
Buy it at Amazon
Source: Galley received from Publisher via Netgalley
**This is a Young Adult Novel**

The Vespertine is sure to be an instant hit with young adult and adult readers alike. Saundra Mitchell has flawlessly married historical fiction with the paranormal to create a poignant coming of age tale set in Victorian Baltimore. This is a book for all the people who don't think they like historical reads. Mitchell's craft makes you forget everything except the characters and the plot. From the first page I was hooked and could not put it the down. I voraciously burned through the pages and was left haunted when I came to the end.

In a time where the rules of society held youth in check with an iron grasp, Amelia van den Broek must struggle with who she is and who society wants her to be. She leaves her home in rural Maine to live with family who will help her find a suitable husband. In this era, marrying for love was rare and Amelia finds herself becoming enamored with the handsome artist, Nathaniel Witherspoon. Due to his lower station he is a poor match for marriage, but Amelia can't help herself. In the end, she finds that it is more than just physical attraction that they have in common. Amelia has the ability to see the future while Nathaniel can travel on the wind. Their gifts will bring them closer together, but will society tear them apart?


Saundra Mitchell does a beatiful job of portraying the Victorian world with its strict societal norms and obsessions with the supernatural. She breathes life into her characters and settings so that the tale not only swirled about my mind, but also my heart. I felt like every tragedy and happiness that befell the characters was mine as well. There were moments when I wanted to weep, throw my Kindle, and smile. A book that can make me feel so strongly and have so many emotions is rare indeed.

One Gripe: The ending - I wasn't ready to let go of Amelia just yet. I felt like her journey was not quite over and I wanted to linger longer.

My Favorite Thing About This Book: The characters - they all came to life for me and I cared about them deeply

It’s the summer of 1889, and Amelia van den Broek is new to Baltimore and eager to take in all the pleasures the city has to offer. But her gaiety is interrupted by disturbing, dreamlike visions she has only at sunset—visions that offer glimpses of the future. Soon, friends and strangers alike call on Amelia to hear her prophecies. However, a forbidden romance with Nathaniel, an artist, threatens the new life Amelia is building in Baltimore. This enigmatic young man is keeping secrets of his own—still, Amelia finds herself irrepressibly drawn to him.

When one of her darkest visions comes to pass, Amelia’s world is thrown into chaos. And those around her begin to wonder if she’s not the seer of dark portents, but the cause.