Book Review: The Fire Inside 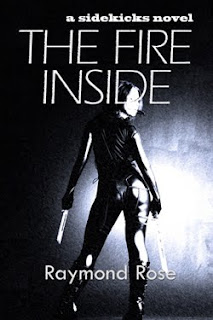 This book was a great break from my vamp/romance rut I've been in of late, and I really enjoyed the heck out this story. Jack King is a reluctant hero - Literally. Once part of the Teen Protectors, an offshoot and often the offspring of The Protectors, people gifted with special abilities ranging far, wide, and fantastical who fought crime; Now the superhero known as Sparks is a mild mannered guy who runs a book store and has a hot and devoted attorney girlfriend named Rachel.

Life is good, and peaceful after The Battle 10 years ago. Until his best friend Bruce, TP name Osprey, pops up at his local coffee spot and attempts to persuade Jack to join a top secret mission. Before he can explain himself or his plans, Bruce is murdered horribly and one catastrophic event after another happens, tossing out little threads the author pulls together cleverly and extremely well. I can usually guess the ending and who's the bad guy, but Mr. Rose had me guessing and guessing, and at more than one point, hanging on the edge of chair.

The cast of characters is vivid, believable and well rounded. The dialogue and relationships are brilliant. The world the author has created is complex, realistic and most likely allegorical. I'm not an accredited scholar, but what I can tell you is: I.Want.More.

The one and only thing I could have used to make my experience better was a glossary of the characters regular names, superhero names, and powers. It would have made it easier for me to keep up with the fast paced action.

There is so little time to read, and never as much as we'd all like, and you can't read everything. Its a horrible fact of life for us avid readers who have to exist in a grown up world - but I tell you this, I will be looking often for the next installment of the Sidekicks series.

Synopsis provided by Author: Ten years ago, Jack and Bruce barely survived a battle royale between good and evil that left half of their city destroyed. Over the years, they’ve drifted apart – their lives going separate paths. Now Bruce is back in town looking for Jack’s help. Because what’s about to happen is worse than anything they could imagine!