Book Review: She Smells the Dead 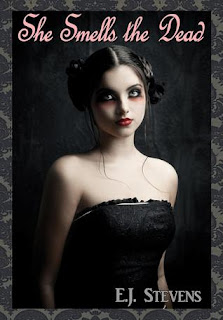 I purchased this for my Kindle awhile back, but had put it on the back burner until the author emailed Reading Lark asking for a review. I immediately jumped on it. I was a bit nervous when I began reading because I instantly began to think of Twilight and The Body Finder. However, as the story progressed, I was pleased to see that even though some of the concepts are those that I have read in other books, E.J. Stevens creates a universe that is all her own. There are werewolves, but they are far from the LaPush variety. Yuki does have the ability to smell the dead, but unlike Violet from The Body Finder series, she does not find dead bodies. She is merely smelling the ghosts of those who cannot cross over.


The paranormal aspects of this book kept me enthralled; I couldn't get enough. I loved that Yuki didn't see the ghosts or interact with them in ways that so many stories and movies have showcased in the past. I honestly can't think of another story where someone senses ghosts totally by smell. I also loved that the werewolves have some of the traditional elements (turning at a full moon - for example), but that they also have some new twists. The story of how the wolves came to exist was one that I found to be fascinating. I also enjoyed the story of the tattoo and its purpose.


The characters in this one also helped me enjoy the read. I am absolutely smitten with Calvin Miller. He might actually be the hottest werewolf in YA fiction for me. He is so strong and protective. I also love that in spite of his hotness, he is not a jerk. Calvin is down to earth and truly cares about Yuki. I think YA needs more characters like him to show teen girls about what being in a good relationship can be like.

In addition, I also really liked Yuki. She is spunky, funny, and sensitive. Her goth wardrobe and dark makeup keep her from fitting in at school. I have always gravitated toward the fringe characters in literature. She is the kind of main character who can keep me loving a series. I look forward to seeing more of her in future books.

Finally, I couldn't give this book 5 stars for one major reason. The plot seemed like it was on fast forward for me at times. The book is only 165 pages so there isn't a lot of time to linger on the trivial aspects, but I would have liked to have read more about the build up of Yuki and Cal's friendship. It seemed like one day they were just friends and the next they couldn't stop making out. Calvin is hot - I get it - I don't blame Yuki - but it was just a shift that was hard to believe based on the beginning. Also, at times the book felt like I was reading two major stories. There was everything surrounding the vinegar ghost and all of the wolf stuff. I suppose I was expecting more ghostly activity than what I got. However, E.J. Stevens has set up the potential for massive ghost activity in the next book as Samhain approaches. I can't wait to get started on book #2! E.J. Stevens has so graciously provided me with a copy of Spirit Storm to review - keep your eyes peeled! It should be up in a week or so.

One Last Gripe: As much as I love Yuki and her sense of humor, there were times when her inner monologue got on my nerves. I also want to know more about why Yuki has the power to smell ghosts in the first place.


My Favorite Thing About This Book: The spirit animals and the stories that go along with them


First Sentence: I can smell the dead.


Least Favorite Character: Simon - he creeps me out


It's the beginning of senior year and Yuki's psychic awareness of ghostly spirits is threatening to ruin her life. Her ability to sense spirits of the dead isn't glamorous like on TV. SHE SMELLS THE DEAD. Yuki is being visited in her dreams and suspects that her friend Calvin is involved in something strange. Will Yuki be able to save the spirits and herself?