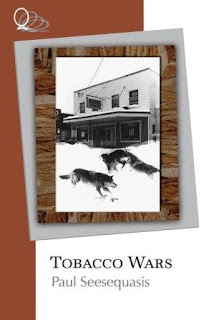 Tobacco Wars is a novella that speaks on the historical issues caused by the tobacco boom in the 17th century. The novella is written with two major plot strands. The first tells the story of Bear Woman and other mythical creatures as they seek to hang onto their old ways of life in spite of the European influx. The second follows Pocahontas in a revisionist history of her life. Tobacco seems to be at the root of the issues between Native Americans and Europeans. Without the Native Americans the Europeans would have remained ignorant for far longer about the plant and its cultivation. As someone with a B.A. in history I have studied this time period at length and always found it so ironic that while the Native American tribes were seen as "savages", it was really their sophisticated agricultural knowledge that allowed Europeans to survive in the harsh realities of the new world and to ultimately thrive. How can a society with such intimate knowledge of the land and a rich cultural tradition be savage? This novella is certainly worth your time if you have an interest in pre-colonial American history, Native American history, or enjoy a well written story full of folklore and symbolism.

Furthermore, this novella really got me thinking about how dominant societies treat minority groups and cultures. I have always been irked by the Eurocentric point of view that dominates most of American history. I really wish I could find what event was the catalyst for this way of thinking. Why should one group be able to deem themselves better than everyone else? In addition, why should they be able to determine that other cultures are wrong or need to change? Often behind these issues lurks monetary gain and existing wealth. During this time period, tobacco was a path to wealth for many. Isn't it interesting that one single plant could cause so much strife? A whole way of life will be irrevocably altered for access to this plant.


I much preferred the segments relating to the tobacco and Pocahontas. The segments with the animals were often explicit and crude in many ways. I am sure there was a larger purpose or symbolism behind the use of sexually explicit concepts, but I just found myself uncomfortable and wanting those parts to hurry up so I could get back to the Pocahontas portion. There are so many wonderful elements to this read that I didn't let that aspect keep me from enjoying the novella, but I did want to put a word of caution out there for readers. I was not expecting those elements and they certainly caught me off guard. However, my favorite animal figure was Wolverine, who kept me laughing more than blushing.

This novella also brought up various concepts that I want to research further. I want to know more about the lives of Pocahontas, John Rolfe, and Ben Jonson. I know of each of these historical figures from my studies, but I do not truly know much about them in depth. I kept wondering how much of the novella was based on fact and how much was pure fiction. I loved the segments of the book that dealt with pirates and I particularly enjoyed Pocahontas' triumph.

Bringing this work into a college course would certainly provide much to discuss and ponder. I think it is an excellent addition into the sources - both fiction and nonfiction - that exist on the topic of tobacco, Jamestown, and the clash of European and Native American cultures.

One Last Gripe: I found the New World Masque to be a distraction and it was hard for me to make sense of

My Favorite Thing About This Book: I loved watching the story evolve from Jamestown to London and back

First Sentence: In the beginning there was only a bear.

Tobacco Wars is a novella about the meeting of two worlds. Set in the early 17th century, it follows the mythical and rollicking adventures of Pocahontas and playwright Ben Jonson - from the inns, alleyways and royal courts of London to pirates, perilous crossings and hostile warriors in the new world. And as worlds are turned upside down and irrevocably altered - a new commodity - tobacco, intoxicates the old world at the same time as an 'Indian princess' undertakes her own age of exploration.

Reading Lark was honored to be the first stop on this blog tour. We hope that you enjoyed reading the review of Tobacco Wars and will stop by the other blogs on the tour.