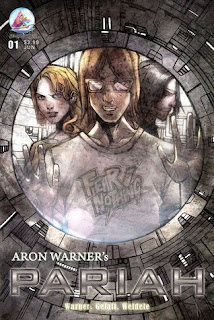 Pariah Issue #1
By Aron Warner
Written by Philip Gelatt
Illustrated by Brett Weldele
Published by Sea Lion Books
Release Date August 17, 2011
Find it at
www.comicshoplocator.com
Audience: Young Adult,
but will appeal to all fans of the Sci-Fi genre

Pariah is graphic novel that is perfectly suited to this time in our society. The novel was fast-paced and the main character, Brent Marks (who I’m secretly hoping to see make it to the screen), is believable and sympathetic. The overall message of fear, intolerance, and the lack of insight of society and their modern technologies were timely and thought--provoking. Pariah #1 is the first of a 12 book graphic novel series that will have you anxiously anticipating the next issue.

Brent Marks, the social pariah, is a “vitro”. Although this issue did not go into any details about what exactly a “vitro” is, there is enough information given about them to start worrying about this special group. Brent is smart, like beyond the average nerd smart. He appears normal, but even though he hides how intelligent he is, he is socially inept because his intelligence and because he is a “vitro”. So, pretty much regular high school suckiness plus the added disadvantage of really being different, like genetically superior different.
When there is an explosion at Marinus Laboratories, home of weapon making scientists, among who are “vitros”, and there is a state of panic as a deadly toxin is released. True to human nature there is panic, then the hunt for justice, even when misdirected. The “Vitros” are declared a Terrorist Cell that must be dealt with. As if Brent Marks didn’t have enough to deal with already! Poor kid just became public enemy number one, and don’t the ignorant bullies just eat that up.

I can’t wait to read the next issue of Pariah. As much as this graphic novel appealed to me, my son has flipped out over it. So, you can pick up an extra copy for your kids too. There is some violence, but it wasn’t excessive, but use caution with little kids.

Summary from Goodreads:
Brent Marks is not a freak. He is one of the Pariah, a group of teens who become extremely intelligent after being cured of a genetic disorder. Although in most ways a normal teen, Brent is considered dangerous and is tracked down by the government who see these kids as an enormous threat. Can he evade them? What do they have planned for Brent and the others?

Aron Warner is the Academy Award®-winning producer of the animated blockbuster “Shrek” series. Mr. Warner joined PDI/Dreamworks in 1997 working as the producer on the animated film, Antz. He is currently in partnership with director Andrew Adamson in Strange Weather where they and partner Jeff Fierson are developing a slate of live action and animated feature films and television shows. He, producing alongside James Cameron, just wrapped the Untitled Cirque Du Soleil 3-D project, which was written and directed by Adamson. Pariah is his first graphic novel series.