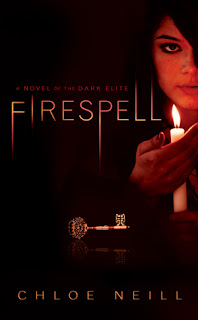 I love Chloe Neill's writing. Within the last year, she has become one of my top five favorite authors. She writes such creative stories laced with lovable characters and witty dialogue. Reading one of her novels is one of the best reading experiences I have had in well forever. She has this way of making you sit on the edge of your seat with anticipation, waiting to see what she'll offer up next. Her humor is also some of the best I have seen.


With all of that being said (Did you gather that I love Chloe's writing?), I was a bit nervous to tackle her YA Dark Elite series. Could it possibly live up to the Chicagoland Vampires, one of my favorite series ever? The answer to that question is both yes and no. Yes, the characters and writing were just as good as what I have seen in the Chicagoland books. However, I didn't love the Dark Elite as much. The characters in the Dark Elite have their own intrigue, but I didn't find them to be as addicting and charismatic as Merit and her crew. That doesn't mean that I didn't enjoy spending time with them - it was just different. I wonder if my reaction would be the same if I had read these prior to reading Chloe's adult series. Lily and Scout have also friendship duo potential and I am excited to see how this will evolve in the future books. These two kept me cracking up and I am sure I earned a few odd glances since I started this on an airplane and couldn't suppress my giggles.

I loved that this series focuses on a new element of the paranormal - the Dark Elite. I don't want to give away too much, but this group has a really fascinating history. I loved the battle that is waging beneath the streets of Chicago. I was expecting this to be about witches, but the gifted youth in this aren't truly witches. One thing I really struggled with was trying to fit this world into the world that has already been firmly established in my mind from reading Chicagoland. Since both of the series are set in Chicago and occur in the modern day, I assumed that some of the rules and situations might overlap. I was expecting the gifted ones in this novel to fall in line with Mallory and The Order, but they seem to be a different breed altogether. I encourage those who have read Merit's story to approach this series as something completely unrelated in spite of the city they share until Chloe tells us otherwise.

I highly recommend this as a strong start to a YA series for those paranormal junkies out there. However, a word of caution, the beginning is a lot of world building and can get tedious at times. Just keep reading and your efforts will be rewarded with sarcasm and creativity.

One Last Gripe: I felt like I knew Merit pretty well after the first Chicagoland book, but I didn't get that feeling about Lily. She's going to take longer for me to know and love.

My Favorite Thing About This Book: Chloe Neill is a master at creating visual imagery. I love watching her books unfold in my mind. She also has me craving a trip to Chicago.

First Sentence: They were gathered around a conference table in a high-rise, eight men and women, no one under the age of sixty-five, all of them wealthy beyond measure.

From the author of the Chicagoland Vampires novels.

A new series about a boarding school filled with something worse than homework. Lily's parents have sent her to a fancy boarding school in Chicago filled with the ultra-rich. If that wasn't bad enough, she's hearing and seeing bizarre things on St. Sophie's creepy campus. Her roommate, Scout, keeps her sane, but keeps disappearing at night. When one day Lily finds Scout running from real-life monsters, she learns the hard way that Scout is involved in a splinter group of rebel teens. They protect Chicago from demons, vamps, and dark magic users. It's too bad Lily doesn't have powers of her own to help. At least, none that she's discovered yet...