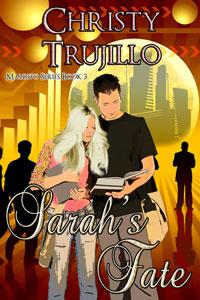 This is the final book in the Maldito trilogy and while I was sad to let these characters go, I also think Trujillo did a nice job of tying things up for readers in this final installment. In the previous books, the plot has revolved around Emmy and Cale. While they are important to this book as well, they cease to be the focus of the action. Its a new generations turn to dominate storylines - enter Sarah and Dre. Sarah, the daughter of Emmy and Cale, is setting out on her own to attend college in New York City. Dre, who first makes his appearance in book #2, lives in the city and uses his vampire abilities to protect his fellow New Yorkers from the evil that lurks in the night - human and otherwise.


I went into this one knowing what to expect from Trujillo's writing based on the two previous novels. I was pleasantly surprised to find that this book was far and away the best written of the series. The plot was more intricate, there were twists that I didn't see coming, and the dialog was more realistic. I can't wait to see how Trujillo's writing will continue to progress as I gear up to read her newest book, True North, in a few weeks. She is such a creative Indie writer who truly loves what she does - you can sense that with each page that you read. Also, in the previous books, there were moments when my mind started to wonder away from the story, but that didn't happen in this one. From the middle to the end, I couldn't put the book down. I needed to know how the story was going to end. I also really liked that in this book Trujillo gave us alternating narrators with Sarah and Dre.

However, while I did enjoy this book and getting to see Sarah and Dre's relationship evolve, I was disappointed in some aspects. First, part of what I loved about these books was Cale. It was hard for me to see him as an older father type in this book; I also missed seeing him as much as I did in the previous books. Dre was a great leading man, but he wasn't as enticing for me as Cale was in the past. Second, I know that one major theme of this entire series is fate, but even knowing that the romance between Dre and Sarah wasn't as believable as Emmy and Cale's relationship. I just didn't buy this new romance as easily. Finally, I was frustrated by the epilogue. This series has so much potential and I feel like it was just gaining some great momentum and then it just ends. Flat. Here's the run down of what happens to every character in the future. The End. I feel like there is still so much story left to tell and so many directions these characters could take. I would like to see more books in the future, but again I just have to trust that Trujillo's vision for the series is the right one. On a minor note, there were still some typos even in the latest edited edition. However, they weren't a huge distraction for me.

If you're looking for some fast, intriguing paranormal romances with crossover appeal, then you should pick up this trilogy. The concept behind the Maldito was fascinating. My favorite in the series is still Emmy's Heart, but Sarah's Fate was still a nice way to wrap things up.

One Last Gripe: I really dislike the covers in this series. I feel like it will turn some readers away.

My Favorite Thing About This Book: I really enjoyed the addition of the witch characters in this one.

First Sentence: My parents have always grossed me out.

Sarah: Could my life be any crazier? Wait, don’t answer that. I’m sure it could. When you grow up with vampire hunter parents, crazy kind of comes with the territory. Thank goodness I moved completely across the country to New York for college. My roommate and best friend, Maria, was able to get me a job at this posh restaurant where all the wait staff perform on stage, I’m so excited. Oh, and the owner is, how do I say this, H-O-T. This is going to be great! New school, new job, there’s no way this can get screwed up. Right? Wait, don’t answer that. Andres: New York is my city. I do what I can to protect her. I know I can never redeem myself, never be forgiven for what I have become, but night after night, I try. It was an existence I had become accustomed to. I didn’t need to have anyone come waltzing into my life and turn it upside down, but we can’t always plan for fate. Sometimes it just happens. Sarah happened to me. In a matter of weeks, she changed everything I wanted, everything I needed. She can’t know what I am, or what I used to be. She can never find out. I will protect her, even if it means protecting her from me.