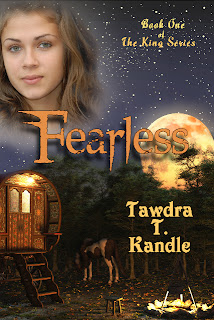 I am so pleased and excited to welcome a good friend of mine to the nest today. Tawdra Kandle recently published her first book, Fearless. I am so happy for her and wanted to share her awesomeness with our readers. She is in my writing group and provides so much inspiration to me. A big thank you to Tawdra for her time!


Andrea @ Reading Lark: What inspired you to begin writing YA fiction?

Tawdra: I had been writing non-fiction (in the form of parenting columns, homeschool articles and curriculum) for about ten years.  But I always, always was 'writing' stories in my head; it was kind of my inner escape from real life.  Every now and then I would jot down names of characters as well as bits and pieces of plot lines or settings.  Most were not young adult; I hadn't really read much in that genre for years.  And then I had about two years of major upheaval in my life. At one point, I ended up sick in bed, and I was desperate for something to read.  I picked up a book someone had recommended to me; it had been in my nightstand for probably about six months. It wasTwilight.  I read it in one night, then read all of New Moon the next day. And then I went against doctor's orders and went out and bought Eclipse.  It was about three weeks before the release of Breaking Dawn, and so I had time to kill.  I had read about how Stephenie Meyer came to write the books, and I thought, Why not?  I took an idea that had been rolling around in my head for a while, and this time, I wrote what was for me the most compelling chapter first, then went back to write the beginning. It worked, and I was able to finish the first version of the book in about four months.  I realized that YA was something I particularly enjoyed. I have three daughters who were at the time in their teens, and so I had access to a certain aspect of that perspective.

Andrea @ Reading Lark: Can you tell our readers a little bit about Fearless and The King Series?


Tawdra: Fearless is the story of Tasmyn Vaughn, a seventeen year old girl whose ability to hear minds has forced her to lead a very secretive and lonely life.  Her parents have impressed upon her the absolute necessity of protecting herself; they fear that anyone who learns what she can do might exploit her gifts.  Her family's frequent moves have helped maintain Tasmyn's  air of aloofness.  The King series follows Tasmyn as she moves to the small and mysterious town of King, Florida, where she finds a way to carve out her first real life--complete with good friends and an amazingly hot boyfriend. But even in the midst of her newfound happiness, there is dark drama lurking just beneath the surface.  The books are as much about Tasmyn's interior journey from a frightened girl who is ashamed of her abilities to a self-possessed young woman who celebrates her powers as they are about the dangers she confronts along the way.


Tawdra: Oh, Tasmyn is a mix of different people.  She and I have an unusual name in common, and in early drafts of the book, there was more about that. I also spent the first part of my childhood moving around quite a bit, and I could definitely relate to the anxiety of being the new girl in school.  Those moves probably formed more of my character than I even realized until I began to write.  She also has elements of my three daughters, though I won't say exactly which ones.  Her self-deprecating humor reminds me of my girls.  I have been blessed to have some wonderful young girls in my life, in addition to my own blood daughters, and Tasmyn has a little bit of each of them.


Andrea @ Reading Lark: Which character in Fearless is the most fun to write?


Tawdra: In Fearless and in subsequent books in the series, Nell is probably the most fun.  I intended her to be only in one book, but she decided to hang around for a while, and I have so enjoyed her.  As a matter of fact, I expect that at some point, Nell will have her own story to tell.  I'm looking forward to that.


Andrea @ Reading Lark: What was the road to publication like for you?


Tawdra: Bumpy.  I was very naive when I finished my first book; like many writers, I was on the euphoric high that comes from actually completing a work.  And then you begin to consider sending that precious work out into the world, and you realize that writing is actually the easy part.  I probably began querying much too early.  I should have listened to all those people who insist that you revise a manuscript at least twice before you begin querying.  I burned through quite a few agent opportunities with a mediocre query letter and what might be considered a slow-starting book.  What kept me from total discouragement was that I did receive positive feedback on my writing ability, even from those agents who were politely rejecting my book.  I suspect that the glut of supernatural YA fiction that flooded the market in the wake of Twilight's success made agents much pickier. (And I did have agents tell me that they were waiting for the bottom to drop out of that trend.)  I learned a lot about the process of publication, and I made some good contacts.  Some well-known authors were kind enough to give me a little advice; one told me that if she were publishing her first book today, she would go with independent publishing (aka self e publication).  It was hard for me to finally decide to do that.  In some respects, it felt like giving up.  But I am so enjoying seeing my book reach real audiences and hearing feedback that it no longer feels that way! I'm happy to know that Tasmyn's story is actually being read.


Andrea @ Reading Lark: How did you come up with the concept for Fearless?


Tawdra: It came from a few different sources.  When my kids were babies, I used to say that I swore they could hear me thinking about them in the middle of the night; they would wake up moments after I silently hoped they would stay asleep!  In joking with my sister about this, I began to think, "What if a baby really could hear thoughts?  What would it be like to grow up always possessing that ability?  How would parents handle that?"  And then my mind just went down that path.  When Tasmyn became that person, she brought her own quirks and bits of history, as did Michael.  I really hadn't given him much thought, and then he just kind of evolved into this very cool kid.  Also, at the time that I was writing Fearless, I was attempting to reconcile a few things in my own mind that became part of Tasmyn's own struggle:  why do some people in the Christian community (of which I am a part) label certain gifts as good and God-given and others as evil? Why do we sometimes limit what might be just another aspect of human ability as unnatural?  And I begin to think about the differences between someone trying to come to terms with an unusual talent and someone who is seeking power for its own sake--different sides of the same coin?  Perhaps. All of that is a running theme in the King books.


Andrea @ Reading Lark: Is there any famous person that looks like Tasmyn?

Tawdra: I hadn't really thought of anyone until the other night, when I saw the movie To Save A Life.  The actress Kim Hidalgo really evoked aspects of Tasmyn, except that Tas has green eyes, and her hair is a little more chestnut.


Andrea @ Reading Lark: Do you have a writing playlist? If so, care to share a tune or two?

Tawdra:  Ooooh, yes!  Music keeps me writing!  For Fearless, Tasmyn and Michael's romance was inspired by a few songs:  Transatlaticism by Death Cab for Cutie, Mesmerized by Lifehouse, Lullaby by Spill Canvas.  And the title for the book actually came from Taylor Swift's song of the same name.  I heard it for the first time as I was finishing the book, and I realized that it captured what Tasmyn was feeling as she fell in love with Michael and began to see the possibilities in her life instead of just the limitations.

Andrea @ Reading Lark: Can you share a little about your current project with us?


Tawdra: I am finishing the editing process on the second and third books in the King series and working on the fourth and final book.  I'm also working on the first book in an adult series--as yet unnamed.  And I'm planning both a book about Nell and a sort of prequel that covers the history of King--how it came to be founded, the stories of Gravis King and Sarah, the original King carnival witch.


Andrea @ Reading Lark: What are you reading?


Tawdra: I've just finished My Last Days as Roy Rogers by Pat Cunningham Devoto, who writes great Southern lit.  And now I'm about to read Crossed by Ally Condie; it's the sequel to Matched. I really enjoyed that one, so I can't wait to read what happens next!

Tawdra: In the north, where I lived for years, cardinals were my favorites.  But now that I'm in Florida, I love when sand hill cranes come to visit us. They're very friendly and curious!

Find out more about Tawdra Kandle: