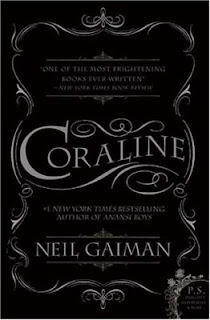 On the Story & Writing:

Neil Gaiman has long been one of my favorite writers. My first experience with his fiction for younger readers was The Graveyard Book, which I absolutely loved. I went into this one with extremely high expectations and Gaiman managed to exceed those standards. I am in awe of his writing style and imagination. He is a truly gifted author who brings such interesting stories to life.


Coraline is a perfect read for middle school students (and older readers) who are seeking a story that will open their imagination. We all find ourselves in moments of boredom where we wish we lived a different life. That doesn't go away as we leave childhood. One of the reasons I find reading so appealing is it allows me to lead a multitude of different lives as I travel through the experiences of the characters. Coraline took me back to the days I wished that I had a different, more entertaining family. I also really enjoyed that Gaiman shows us that the grass is not always greener on the other side.

Gaiman also proves one more time how amazing he is at universe creation. He never ceases to amaze me with the wonderful settings he pulls out of his imagination. He is an artist with words - creating visual landscapes in the minds of readers. Reading one of his books is a magical experience. This novel is one that is dark and creepy, but also somewhat hopeful.

This is a short, magical read that was full of adventure. I haven't seen the film so I can't compare it to the book, but I would highly recommend this read.

I love it when authors narrate their own stories. They can often lend more to the characters since they know exactly how they would sound because they created them. Neil Gaiman has a very soothing voice that fit well with the story. Furthermore, this edition has some interesting musical moments that added an air of creepiness to it. The audio was well done and I would recommend listening to it if you don't have time to read the book on your own.

One Last Gripe: I want to know how the other mother came to exist in the first place.

My Favorite Thing About This Book: Coraline's logic

First Sentence: Coraline discovered the door a little while after they moved into the house.

When Coraline explores her new home, she steps through a door and into another house just like her own - except that things aren't quite as they seem. There's another mother and another father in this house and they want Coraline to stay with them and be their little girl. Coraline must use all of her wits and every ounce of courage in order to save herself and return home... but will she escape and will life ever be the same again?