Skip to main content
Labels
Posted by Michele B (ReadingLark/CdnTwiMom) May 29, 2012 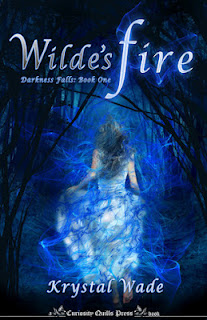 Overall, I found Wilde's Fire to be an enjoyable and entertaining read from debut author, Krystal Wade.  It had all the elements of high fantasy with a tinge of sci-fi thrown in by transporting the main character Katriona (Kate) Wilde to another world via a portal she and her sister and best friend were lead to during a camping trip.

Following a mysterious bright yellow light through a dark forest by yourself in the middle of the night might terrify most people and have them running back to the safety of their tent but not Kate.  The next morning Kate, Brit (her sister) and Brad (her best friend) set out to investigate that light further and find themselves transported to another world that is as terrifying as it is otherworldly.  What happens next turns Kate's world upside down and she finds the life she has been leading all along had been pretty much a lie.

I enjoyed Kate as a protagonist for the most part, even though, at times, her decisions and naivety were a bit of a stretch that didn't always seem fit in with her general character.  However, there were explanations given for some of these flaws that I could live with.  Kate was kind at heart and strong in will, and that helped to establish the connection to her character that I was looking for as there was no physical description of her till about halfway through the book.  And those positive attributes quickly, and not surprisingly, caught the attention of Arland Maher.

For several years earlier, Kate had dreams or visions of a beautiful man that she was deeply in love with.  Sometimes the dreams were wonderful but mostly they were nightmares that involved them fighting side-by-side and often resulted in his or both of their deaths.  Imagine her surprise when she literally meets the man in her dreams on the other side of the portal.

Arland was pretty much the perfect leading man and I couldn't help but swoon over him in all his beautiful perfection.  He was incredibly patient and loving where Kate was concerned.  He was a strong and respected leader of his people.

The love story between Kate and Arland was all-consuming, and in essence, saved them on many occasions.  Even though they only had been in each other's presence for a short while, their destinies were entwined from the beginning of both their lives and her visions of him already felt like they had known each other for years.  Their being together was sweet and sensual and I couldn't get enough of that.

However, I did struggle with the story at a few points along the way... whether someone was acting out of character, or there was an abrupt transition.  It might have lacked some continuity as events unfolded, but regardless, I found myself mostly invested in the author's story and her characters.  And a subtle thing that is worth mentioning is that the author was quite adept in distinguishing the people of Encardia in the way they carried themselves and spoke.  As much as they were very much like 'us', I felt their 'otherworldliness' at the same time.  It was a little thing that helped to improve the fluidity of the story.

For the most part, the secondary characters were well developed.  I adored Flanna!  Flanna is Arland's cousin and quickly becomes a great friend and confidant to Kate.  I hope to God that she is not one of the traitors -- I HAVE to believe she is not!  She was definitely a favourite!

Conversely, Kate's best friend of many years, Brad, was a difficult character to appreciate, and I think that was intentional.  We were lead to believe he was a certain kind of person, only to have it explained with a different spin towards the end of the story, leaving me totally confused as to how I felt about him overall... and again... I think that was intentional.

I was expecting this story to be about teenagers as Netgalley classified it as YA but I believe the age range of the major characters was 19-25+.  There is some mature content involving a bit of language and intimacy but I believe it was tastefully handled.

Overall, I quite enjoyed Wilde's Fire and felt it was a good effort from a new author.  The story kept my interest so I could forgive some of the disjointedness I felt at times.  The concept was interesting and refreshing, and I would definitely read the next installment as it does end on a bit of a cliffhanger.

I'd like to thank Curiosity Quills Press and Netgalley for the opportunity to review this book.

“There is no pain in this death, only peace, knowing I am going to die with the one I love the most.”—Katriona Wilde.

Katriona Wilde has never wondered what it would feel like to have everything she’s ever known and loved ripped away, but she is about to find out. When she inadvertently leads her sister and best friend through a portal into a world she’s dreamed of for six years, she finds herself faced with more than just the frightening creatures in front of her. Kate’s forced to accept a new truth: her entire life has been a lie, and those closest to her have betrayed her. What’s worse, she has no control over her new future, and it’s full of magic and horrors from which nightmares are made. Will Kate discover and learn to control who she really is in time to save the ones she loves, or will all be lost?