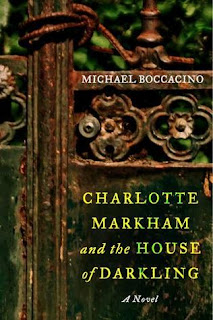 If Tim Burton, Edgar Allan Poe, and Henry James worked together on a book, I imagine that they would come up with something akin to Charlotte Markham and the House of Darkling. Michael Boccacino's debut novel is a gorgeously written gothic fantasy that is full of chills, hidden deceptions, and heart pounding adventure. There were several evenings when thunderstorms battered our town while I was reading this one and that atmosphere combined with this plot was the perfect way to get my imagination to run wild. I have to admit that once or twice I got too freaked out to keep reading. I love books that can entertain and terrify.


The novel opens in one of Charlotte's dreams. Charlotte, a young widow working as governess, admits quickly to the reader that, "Every night I dreamt of the dead" (pg. 2). That's it all took to convince me that this was a story I wanted to hear. Charlotte has watched everyone close to her die and in that moment that they draw their last breath, a man in black appears. She has no idea who this man is - though she suspects he may be Death - or why he chooses to haunt her life and dreams. After the death of her husband in a house fire, Charlotte finds herself alone and takes a job as governess on an estate, Blackfield, in the English countryside. The murder of an other employee on the Blackfield grounds will start a chain of events that will lead Charlotte down a dark path to find the answers about death.

I loved the creativity of this one. There are so many wonderful little details lurking in these pages. The House of Darkling almost seems alive and becomes a character of sorts. The collections within the house fascinated me - candle people, statues of emotions, and a library filled with books that when opened transport the reader directly into the story. I can't imagine how much fun I could have in a library like that! I was mesmerized by everything in the world of Darkling. There were also numerous troubling aspects, but they just made the plot that much more exciting. From the middle on, I could not stop reading and finished the second half of the book in one sitting.

Another element I loved about this novel was the gorgeous writing. Michael Boccacino is a word artist. He uses sentences the way a master painter flourishes their paintbrush. The story is so visual and I couldn't help but hope as I was reading that perhaps one day this book would be brought to the big screen.

Finally, I enjoyed thinking through all the symbolism surrounding death and dreams. Death is one of those things that is difficult for many of us to process. Everybody does it - yet nobody can explain the process. For centuries, people have been coming up with theories about what happens when we die. It is one of the great mysteries that will never be solved.

One Last Gripe: The dinner party scene had some moments that were so grotesque that it made my stomach churn

My Favorite Thing About This Book: I loved so much about this one, but one thing that I enjoyed was just the experience of being transported to a totally different world. I felt like an active participant and not just a casual observer.

First Sentence: Every night I dreamt of the dead.

Debut novelist Michael Boccacino invites readers into the world beyond the realm of the living in Charlotte Markham and the House of Darkling, a Victorian gothic tale of the strange and supernatural. But all who enter this house must beware--for there is a price to pay for visitors who wish to save those they love. The story of a British governess and her young charges seduced by the otherworldly enticements of a mysterious mansion in the forest following the inexplicable death of the former nanny, this Tim Burton-like tale of dark fantasy is a bewitching treat for fans of horror and paranormal fiction, as well as readers who love creepy gothic tales and mysterious shadowy English manor houses. Not since Suzanna Clarke introduced Jonathan Strange to Mr. Norrell, and Neil Gaiman's Coraline crawled through a secret door into a twisted and sinister mirror world, has there been a journey as wondrously fantastic and terrifying as Charlotte Markham's adventures in the House of Darkling. 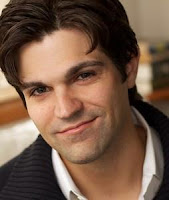 Michael Boccacino’s poetry has been published in the St. Petersburg Times. He currently works and lives in New York City. This is his first novel.