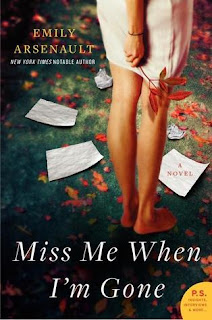 Emily Arsenault has done it again. Miss Me When I'm Gone is another well crafted mystery that spotlights the darkness that lurks in the human soul. I am often so amazed by writers who can craft compelling mysteries, but Arsenault is something beyond my normal fascination. She elevates the traditional "who-dunnit" story to one full of dark, twisted turns and paths through dark alleys of family secrets. The depth of her characters is something that sticks out for me when I read one of her books. This is a not a mystery driven by plot, but rather one that requires all the literary elements to work in harmony together; Arsenault is a master of characterization and sense of place.


I loved the experience of reading this book. Not only did I learn a tremendous amount about country starlets (which is not a topic I would have chosen to research on my own), I also had a lot of fun piecing together the clues. This book is like an iceberg - the summary only hints at what's lurking beneath the surface of these pages. The complexity of relationships in this one also added another intriguing layer. I also found that several characters truly surprised me with their actions. Deceit isn't always easy to spot.

I can say with certainty now that I have finished two of Arsenault's books, that she is by far one of my favorite mystery writers. There is just something so compelling about her prose that never ceases to pull me into the story and keep me firmly entrenched there until the last sentence. I love that she doesn't focus on gory and gruesome details, but brings a more human element to the genre. Loss is one of the things she tends to focus on a lot in her writing. It's always interesting for me to see how characters respond to loss and regret. Furthermore, I love that her books tend to center heavily around strong female characters. Jamie and Gretchen are no exceptions.

The format of this one was also really interesting and provided a different sort of reading experience. I loved that it bounced between the dominant narrative strand, novel excerpts, writings, and other sources of information. It was an interesting way to give Gretchen a voice in the story - despite her being dead for the vast majority of the book. There also was a bit of spooky feeling as I progressed further into the story and Gretchen's writings and research became even more crucial to the plot. The concept of what happens to our secrets when we die was something interesting to ponder. Furthermore, It's silly, but I loved that the beginning of each chapter was marked with a sticky note. It went along so well with Gretchen's writing.

One Last Gripe: I didn't like that Jamie sometimes put Gretchen before her unborn child

My Favorite Thing About This Book: The pacing - it flows at a perfectly tantalizing speed

First Sentence: This gem might be well known among seventies tabloid readers and longtime country music fans, but perhaps not to the general reader: Tammy Wynette once saved Burt Reynolds from drowning in a bubble bath.

Least Favorite Character: I can't tell you because it would ruin the story

Gretchen Waters is most famous for her book Tammyland-a "honky-tonk Eat, Pray, Love," a memoir about her divorce and her admiration for Tammy Wynette, Loretta Lynn, and Dolly Parton. When Gretchen dies falling on a set of stone steps outside of a library, everyone thinks it was an accident or a botched mugging. Jamie, Gretchen's best friend from college, certainly has no reason to suspect foul play. That is, until she becomes Gretchen's literary executor. Gretchen's latest manuscript is much darker than Tammyland-ostensibly about her favorite classic male country singers, it's really about a murder in her family that haunted her childhood. From beyond the grave, Gretchen's writing opens up a sinister new world, and suddenly, Gretchen's death seems suspicious-and then Jamie finds herself in danger as well... 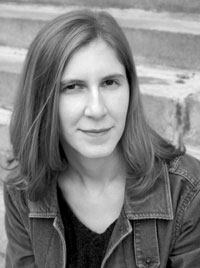 Emily Arsenault is the critically acclaimed author of The Broken Teaglass, a New York Times Notable Mystery, and In Search of the Rose Notes. She lives in Shelburne Falls, Massachusetts, with her husband and daughter.

Check out the other awesome stops on this tour: