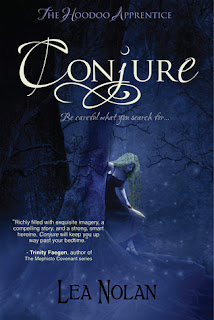 I was originally drawn to this book because of its roots in the South Carolina lowcountry and Gullah traditions. I have long been fascinated by both topics. I am so glad that I decided to give this book a try! It was a magical adventure with a dash of southern flavor. It's also one of those books that I would feel comfortable recommending to my middle school students.

Emma Guthrie is a fourteen year old girl who spends her summers on an island of the coast of South Carolina with her twin brother, Jack, and her father. Emma lives for the summers; she loves the island and getting to spend time with Cooper Beaumont, a lifelong friend and the boy of her dreams. An ancient bottle and a mysterious girl push the trio into an adventure they will never forget. They discover a treasure from the past that offers up more than pieces of gold; Emma races against time to find cures for curses that could take away the two people she loves most in the world.


I loved these characters and their interactions. There were several moments when I wanted to smack Jack, but I learned to forgive his crankiness. The Creep would certainly have me acting like a jerk too. The Creep is a disgusting yet oddly intriguing curse cast by a very angry root worker who seeks the worst sort of revenge she can imagine against men who have wronged her family. One of my favorite characters was Miss Delia. I loved her spunk and knowledge. It couldn't have been an easy decision to share the hoodoo spells with Emma, but her heart wins out and she can't imagine seeing these kids suffer when she has the power to help them break the curses.

The adventure in this one is action packed. The curses descend in the beginning chapters and then it's a thrill ride all the way to the end. I was so nervous for Emma, Jack, Cooper, and Miss Delia as I read. I wanted a happy ending, but there were so many obstacles in their path. In the end, there is some resolution, but not every issue finds its solution. This leaves me anxiously awaiting the next installment.

I loved that this book could appeal to both female and male readers. There is a little bit of romance, but it's realistic and chaste. It's not anything that would make me blush or would cause my male students to roll their eyes. Also, even though the story focuses on Emma the most, Jack and Cooper do play major roles as well.

Finally, as a history nerd, my heart soared at the evidence of research that littered this text. I loved that Lea Nolan took the time to understand the Gullah culture. Of course, this is fiction, and I know she took some artistic license in spots, but I still feel like she did a nice job of being accurate in many instances as well. Novels that expose me to intriguing cultures are always a win in my opinion. I'm also a fan of novels with a strong sense of place that can transport me to the setting - Conjure certainly delivers on this front.

One Last Gripe: My only major complaint with this one is that I found the "twists" to be a little too predictable.

My Favorite Thing About This Book: The hoodoo components

First Sentence: The waves thrash against the shore in a rage.

Be careful what you search for...Emma Guthrie expects this summer to be like any other in the South Carolina Lowcountry--hot and steamy with plenty of beach time alongside her best friend and secret crush, Cooper Beaumont, and Emma’s ever-present twin brother, Jack. But then a mysterious eighteenth-century message in a bottle surfaces, revealing a hidden pirate bounty. Lured by the adventure, the trio discovers the treasure and unwittingly unleashes an ancient Gullah curse that attacks Jack with the wicked flesh-eating Creep and promises to steal Cooper’s soul on his approaching sixteenth birthday.When a strange girl appears, bent on revenge; demon dogs become a threat; and Jack turns into a walking skeleton; Emma has no choice but to learn hoodoo magic to undo the hex, all before summer—and her friends--are lost forever.