Book Review: Lola and the Boy Next Door 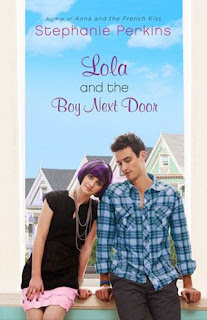 I knew that Lola and the Boy Next Door was a companion novel to Anna and the French Kiss - not a sequel - but I wasn't prepared for such a different voice. Yes, Lola is a new character, but for some reason I just expected to bond with her on page one the way I had with Anna. That didn't happen, but I did end up enjoying Lola and her story.

Lola Nolan, is an aspiring fashion designer, who can't wait to grow up. There were moments when Lola seemed too mature for her own good. I was a little taken back when I realized that her boyfriend, Max, was so much older than her. I understood Lola's attraction to him - what teen girl doesn't go swoony when a hot musician pays attention to her? What I couldn't understand was why Max was so attracted to Lola. I spent a large portion of the book being angry with him. Lola wasn't allowed to be a teen when their relationship was weighing her down. Max was forcing her to act older and forsake her friends and family. While I appreciate that Perkins painted this as a dysfunctional relationship, I was still really bothered by it. Max was controlling and demanding.


Perkins did bring back her characteristic "Whose the girl gonna end up with?" anxiety in this one. She is a master of keeping me on an emotional leash. I love how she takes female characters and helps them morph into strong, iron winged butterflies. The growth of Lola throughout this story was inspiring. I loved that she began to truly see herself in a true light and she found the spirit to stand on her own two feet. I also am always amazed at the depth of Perkins' characters; they are so real that they could step out of the pages of the story and into my living room. I always feel like I know them so well by the time I'm done reading one of her stories.

Cricket Bell adds another delicious layer to Lola's heart struggles. He's a hard one to resist. I liked that he was as endearing as St. Clair, but he didn't seem like a recycled version of the boy who had already stolen my heart. Cricket is sweeter and shyer than St. Clair. He doesn't have that strong charisma and sense of self. In many ways, he is a mirror of Lola. Neither of these characters sees themselves clearly in the beginning. Cricket is the handsome nerd who gravitates toward the girl he has known his whole life who is full of sparkles and light. I loved that he knew what he wanted and never wavered - even when Lola was being difficult. He is the type of guy that ever girl should dream about and every parent should wish for in a significant other for their child. Stephanie Perkins is a master at creating fictional boys that capture hearts and inspire romantic musings; her hot boy writing skill is one of the best out there.

In addition, while I missed Paris, I did love the new setting - San Francisco. I have wanted to visit San Francisco for ages; it was interesting to learn more about the city from the perspective of these characters. Lola loves her home and it shines through her dialogue and inner musings. I enjoyed being able to take this vacation in my mind until I can make time for the real thing.

If you haven't read Anna and the French Kiss - I recommend you don't read past this point.....

One of my favorite aspects was the amount that Anna and St. Clair appeared throughout the course of the novel. I expected them to show up once or twice, but I didn't realize they would play such reoccurring roles. It was so good to see them again. Anna, in true Anna fashion, is working at a theater as she attends school in San Francisco. Lola is her co-worker and the two become good friends. St. Clair is always hanging around because he has to be with Anna as much as possible. I love that the pair is not just madly in love - they are best friends. I think that is so important in a relationship. Anna and St. Clair provide an example of a healthy, loving relationship. Lola wants what they have and that gives her the strength to follow her heart.

Overall, this is another wonderful novel by Stephanie Perkins. It's hard to live up to the magic of Anna and St. Clair, but Lola and Cricket put up a compelling fight. I hope we get to see both pairs in the final companion novel, Isla and The Happily Ever After.

One Last Gripe: I had a difficult time getting settled into Lola's narration style - it took me about 30% of the novel to finally be comfortable with her at the helm of the story telling

My Favorite Thing About This Book: The character development

Favorite Character: Cricket - Why didn't a boy like this live next door to me when I was growing up?

Budding designer Lola Nolan doesn’t believe in fashion...she believes in costume. The more expressive the outfit--more sparkly, more fun, more wild--the better. But even though Lola’s style is outrageous, she’s a devoted daughter and friend with some big plans for the future. And everything is pretty perfect (right down to her hot rocker boyfriend) until the dreaded Bell twins, Calliope and Cricket, return to the neighborhood.When Cricket--a gifted inventor--steps out from his twin sister’s shadow and back into Lola’s life, she must finally reconcile a lifetime of feelings for the boy next door.