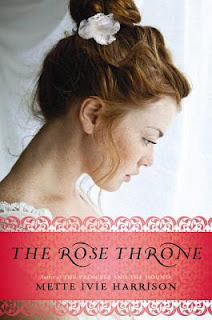 I'm not always drawn to straight up fantasy novels. I tend to enjoy a little paranormal aspect thrown in the mix. There are moments though when my typical reads begin to get a little stale and I crave something new. This was the perfect novel to cleanse my reading palate. It's a vastly different sort of story than those I typically reach for, but it was immensely entertaining.

Ailsbet and Issa are both princesses, but they come from very different kingdoms. Ailsbet is the daughter of the powerful king of Rurik. The kingdom is run with an iron fist and those who do not meet the king's approval are often persecuted. King Haikor, Ailsbet's father, believes that neweyr, "the magic of life that [binds] women to the earth" (pg. 2), is only for women and men should only be graced with taweyr, "the magic of death and war" (pg. 4). He does not accept those who are born with the opposite gender's magic. These people, the ekhono, are forced to flee Haikor's kingdom or be killed.


Issa's existence in Weirland is very different. The ekhono are not feared or persecuted; they are given sanctuary in Issa's land. Wealth is not as prevalent as it is in Rurik, but the people live in peace. They fear that one day King Haikor will begin a way to reunite Weirland to Rurik. Once upon a time, these two islands were one great kingdom, but an ancient story details how they came to be separated. In addition, an ancient prophecy speaks of the one who can successfully rule both kingdoms.

In spite of their different homes and cultures, Ailsbet and Issa have more in common than they ever could have imagined. Neither girl is allowed to follow her heart. Their free will is non-existent and their fathers make all the decisions for their lives. Each of them is betrothed to men they do not love. Each must do what their fathers feel is for the good of the kingdom. I really enjoyed the commentary on the treatment of women in this story. In the end, it is the women that have more power. I loved seeing two strong female protagonists. Neither Ailsbet or Issa is a damsel in distress - these ladies can hold their own.

Another fascinating component of this novel was the magic. I found the explanation behind the various forms of magic to be intriguing. King Haikor's hatred of differences made me think of many contemporary issues. The treatment of the ekhono was heartbreaking and unfair. The notion of social justice in novels is one that always intrigues me. Novels with these elements provide many conversation points.

The structure of the novel was also a strength. Each chapter is told from the perspective of one of the princesses. I liked being able to get inside both of their heads so I could understand their actions and motivations better. I preferred Issa, but Ailsbet also has many admirable qualities.

While I did enjoy this novel, I did struggle with the middle. The beginning instantly hooked me and the conclusion kept me reading at a frantic pace, but the middle was tedious. There were moments when I felt bogged down by details. Other moments left me feeling bored. Pushing through these chapters were well worth the heart pounding ending. I'm not sure if there will be another book, but I can only hope for one. I need to know more about Issa and Ailsbet's fates. There is a sense of resolution, but a few dangling threads could easily weave another story.

One Last Gripe: I wasn't a fan of the romance elements in this one.

My Favorite Thing About This Book: I really enjoyed this world. Harrison explains every detail and writes in such a way that this novel feels like historical fiction instead of fantasy. It's gorgeous.

Ailsbet loves nothing more than music; tall and red-haired, she's impatient with the artifice and ceremony of her father's court. Marissa adores the world of her island home and feels she has much to offer when she finally inherits the throne from her wise, good-tempered father. The trouble is that neither princess has the power--or the magic--to rule alone, and if the kingdoms can be united, which princess will end up ruling the joint land? For both, the only goal would seem to be a strategic marriage to a man who can bring his own brand of power to the throne. But will either girl be able to marry for love? And can either of these two princesses, rivals though they have never met, afford to let the other live?