Novella Review: Die For Her 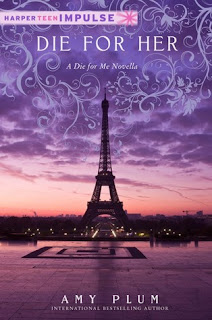 
After reading Die For Her, I have a new appreciation for Jules.  I already found him adorable in the previous books, but getting into his head in this novella, which also serves as a retelling of the events of the Revenants trilogy up to the end of the middle book through Jules’s point of view, just made me love him all the more.

Jules has got it really bad for his best friend’s girl.  He loves Kate, too.  And unlike Vincent’s love for her, it wasn’t love at first sight for Jules with Kate…his feelings developed over time as he slowly witnessed what Vincent saw in her.  You have to read Amy’s extra/out-take of Jules’s point of view for the exact moment in which Jules’s feelings changed for Kate.
*dreamy sigh*

Jules’s flirtatious personality is one that Vincent and Kate have appeared to look upon as harmless in what we’ve read so far.   But the depth of Jules’s feelings for Kate was still a bit surprising but not altogether unexpected especially once we heard Jules’s side of things.

Vincent’s best friend actually had some key things in common with Kate…their love for art…and their love for Vincent.  Jules looks upon Vincent as not only his best friend but he’s very much like a brother.  He genuinely wants Vincent to be happy, but that wars with Jules and his own desire to be happy…and both boys feel that their future happiness lies with the same girl.

Typically, in love triangles, it is sometimes hard to imagine a girl being so lucky to have TWO hot boys in love with her, but in Kate’s case, it’s easy to see.  Kate IS all that the boys see in her.  They don’t put her up on an undeserving pedestal.  She’s brave and selfless in her own right…if not a bit clueless sometimes…but no heroine is perfect.

And because this novella serves as a retelling from Jules’s point of view, we also get more insight into what went on when Kate wasn’t hanging around La Maison.  We further learn that Jules shares Kate’s trepidation concerning Vincent’s plan to try to resist dying in order to be with Kate during her natural life…and those reasons are not selfish.

Jules had several opportunities to take advantage of the situation and be selfish--and make no mistake--he was very tempted on many occasions.  But Jules is one of the good-guys…not only by his true nature but his nature of being a BARDIA revenant.

This is unrequited love described at its best…because as much as Kate and Jules would probably be very good together, she and Vincent do belong together, in my opinion, and Kate is true in her love for Vincent.  She never led Jules on.  I don’t know how Jules will ever be happy, as she obviously cannot have both.  Having just read another infamous, well-written love triangle not too long ago, I’m counting on Amy Plum to find a solution that truly works and everyone gets their happily-ever-afters in the last book, If I Should Die, of which, I’m just about to start!

Set in the romantic and death-defying world of the international bestselling Die for Me trilogy, this digital original novella follows Jules, a brooding, immortal French artist who has fallen in love with his best friend’s girlfriend.

Jules Marchenoir is a revenant-an undead being whose fate forces him to sacrifice himself over and over again to save human lives. He’s spent the better part of the last century flirting his way through Paris, but when he met Kate Mercier, the heroine from Amy Plum’s Die for Me trilogy, he knew his afterlife had changed forever and he had found the love of his life. Until Kate fell for his best friend, Vincent. Now Jules is faced with an impossible decision: choosing between his loyal friend and a love truly worth dying for.

Labels: 4.5 Birdies Amy Plum Book Review Die For Me Harper Teen Michele B. Novella The Revenants Until I Die