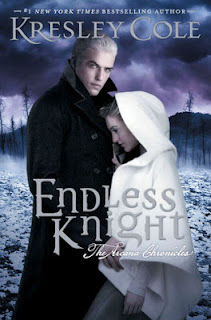 LOVE, LOVE, LOVE!!!  Perhaps one of my most favourite reads this year!

Endless Knight, book two of The Arcana Chronicles, by well-known adult paranormal/fantasy author Kresley Cole, was a heart-stopping and heart-melting sequel to Poison Princess.  Although this was technically a paranormal post apocalyptic story, there was more emphasis on the the paranormal aspect than the dystopian aspect.  Imagine a supernatural version of Survivor but to the death, and after a major catastrophe.  Each ‘player’ represents one of the 12 mystical major arcana cards in the tarot deck and their gifts/powers are related to the subject of that card.  Every few centuries, a major catastrophe serves as the catalyst for a new game...where alliances are made and then shift, and betrayals run a plenty...until there is ultimately one victor.  Their prize...ageless immortality...until the next game, that is.

Most of the world-building occurred in Poison Princess, although intense and exciting and romance-filled in its own right, it really served as the foreground to the actual game being played.  In Endless Knight...the game IS ON!

Picking up at the exact moment where Poison Princess left off, Evie, the Empress, has come into her true powers.  One of the main reasons why I loved Evie as a protagonist was that she was literally a game changer.  She wanted this game to be different.   Until just prior to the apocalypse, she was a beautiful, normal and privileged teenage girl...queen bee who dated the most gorgeous and sought-after boy in her school.  She had the perfect life until she started having visions that were literally terrifying.  Led to believe there was something wrong with her until she could not deny her powers any longer, these visions and strange occurrences turned her life upside down.  Ultimately thrown into life and death situations, she got wise to the dangerous world around her pretty fast.  But she grew and became a force to be reckoned with, while still remaining true to her core.  How does she fare?  You’ll just have to read to find out.

Jackson, originally from the poor side of the Bayou, continued to have me swooning.  I do not normally like the ‘cave-man’-type boys but Jackson was different. Although he had a rough, hardened exterior, Evie was his soft-spot...his weakness.  He was somewhat possessive but in a way that didn’t feel demeaning.  Her decisions were hers and not his.  Jack was protective and also tough with her...he feared that she was too soft to survive this world, so he pushed her beyond her limits.  He helped to toughen Evie up while on the run throughout most of this story, while winning her heart in the process.  And mine!  But he wasn’t perfect either...as shocking secrets came to light...the game changed yet again!

Now...there were hints in the previous book of something brewing with the mysterious Death.  He is literally the Death card and his introduction is fully rolled out in this installment.  And as much as I had been fervently Team Jackson...and couldn’t imagine switching teams...imagine my surprise when I started to fall for Death right along with Evie.  How the heck did THAT happen??  You’ll see…

He’s perfectly gorgeous (of course) but ever mysterious, stand-off-ish, sophisticated and ruthless...he was obviously not easy to warm up to...but as his story unfolded, you could see he was made up of many layers too...and it was hard not to be empathetic towards him.

So, there was a love-triangle...but this is one of those GOOD ones.  Not pointless...very believable...leaving me fully torn down the middle.  The chemistry Evie shared with both boys was palpable and steamy, tender and passionate.  I will interject and caution readers here.  Although Evie was 16/17 and this series has been classified as YA, there were some very mature situations in this book...fairly explicit for YA.  I’d personally recommend this story to older teens...much older.

The twists and turns in this installment were INSANE!  Being led to believe one thing only to be turned in a completely different direction by a stunning revelation had me gasping throughout!  I saw some things coming...and have some theories that have yet to come to pass, but there was never a dull moment in this story.  There was no part where it seemed to drag.  I was totally enthralled and when I got to the last page (mild cliffhanger compared to others I’ve read recently)...I was literally willing more pages to follow.  This book was sinfully delicious...and my toes might have curled a couple of times.  I really need the next book...like NOW!

In this seductive follow-up to Poison Princess, #1 New York Times bestselling author Kresley Cole takes us deeper into the dark world of the Arcana Chronicles.

Evie has fully come into her powers as the Tarot Empress, and Jack was there to see it all. She now knows that the teens who've been reincarnated as the Tarot are in the throes of an epic battle. It's kill or be killed, and the future of mankind hangs in the balance.

With threats lurking around every corner, Evie is forced to trust her newfound alliance. Together they must fight not only other Arcana, but also Bagmen zombies, post-apocalyptic storms, and cannibals.

When Evie meets Death, things get even more complicated. Though falling for Jack, she's drawn to the dangerous Endless Knight as well. Somehow the Empress and Death share a history, one that Evie can't remember—but Death can't forget.

If you haven't already...check out my review for Poison Princess here.