Book Review: The Opposite of Loneliness 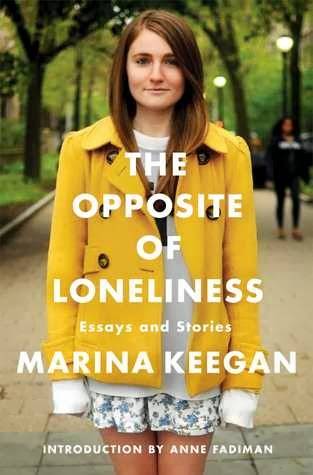 I'm not sure how to talk about this posthumously complied and absolutely breathtaking collection of essays and short stories without mentioning the tragic death of it's author.

Like the millions of people who read the article this book takes its title from, I became familiar with Marina Keegan's writing when her last article for Yale Daily News went viral shortly after her graduation and her untimely death, two things that occurred within days of each other. And even though I know it has nothing to do with her writing ability, Marina Keegan seemed to be the kind of person I'd have been proud to know, the kind of person I sleep better knowing exists in the world. She was poised to be the (often overused, but entirely appropriate in this circumstance) voice of a generation and she had something important to say. And essays and short stories collected in The Opposite of Loneliness are just as fascinating and tragic as its author was in life and death.

The fiction pieces, which account for just over half of the collection, are both raw and relationship/character-centered, just how I like my fiction. From the old woman with a predilection to taking her clothes off while she volunteers to read for the blind in "Reading Aloud" to the college student trying to be more in love than she really is in "Cold Pastoral" (read "Cold Pastoral" in its entirely at The New Yorker), Keegan creates characters you lose time with. With one or two exceptions, her short stories are also centered around the idea of love, not the hearts and flowers love though, but the complicated and confusing love that we don't always like to acknowledge. And even though some of the ideas her characters have about love are nontraditional, I found my time with them to be both them comforting and familiar. Notable favorites are "The Ingenue" and "Hail, Full of Grace" along with the two stories previously mentioned.

Though slightly outnumbered by the fiction pieces in the collection, Keegan's essays are equally powerful and enjoyable in a much different way. Some, like "The Opposite of Loneliness," are thought provoking and inspirational, but by and large, they're just GOOD WRITING. The kind of writing that makes you pause and take a breath, just to savor the words. She can make a topic as unexciting as a gluten-free diet (cleverly titled "Against the Grain") and turn it into the most enjoyable 12 pages you've read. In "Stability in Motion," a loving portrait of her first car, she makes you long for the days when you took road trips and intentionally "played Simon and Garfunkel -- hoping [the boy who wasn't quite a boyfriend yet would] realize all the songs were about us" and when, "on the night we decided to just be friends[, your] car listened to [you] cry for all twenty-two and a half miles home." Notable favorites are "Why We Care About Whales" and "Song for the Special" along with the two just mentioned.

"The Opposite of Loneliness" comes out on April 8th. Get it.

Last Word: "The Opposite of Loneliness" is a diverse and delicious collection of essays and short stories that will leave you satisfied and wishing you had Keegan's next book to look forward to.

An affecting and hope-filled posthumous collection of essays and stories from the talented young Yale graduate whose title essay captured the world's attention in 2012 and turned her into an icon for her generation.

As her family, friends, and classmates, deep in grief, joined to create a memorial service for Marina, her deeply moving last essay for The Yale Daily News, "The Opposite of Loneliness," went viral, receiving more than 1.4 million hits.

Even though she was just twenty-two when she died, Marina left behind a rich, expansive trove of prose that, like her title essay, captures the hope, uncertainty, and possibility of her generation. Her short story "Cold Pastoral" was published by NewYorker.com just months after her death.

The Opposite of Loneliness is an assemblage of Marina's essays and stories, which, like The Last Lecture, articulate the universal struggle that all of us face as we figure out what we aspire to be, and how we can harness our talents to impact the world.