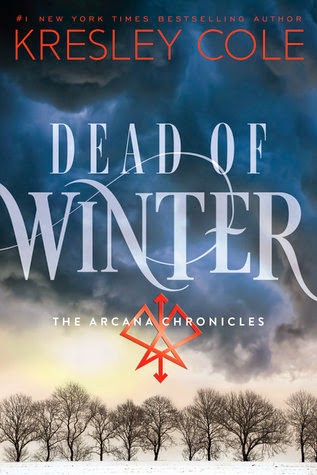 I am SO not a fan of cliffhangers.  I was very tempted to throw my book against the wall.  BUT…I cannot deny how much I loved this story and how invested I have been in these characters from the beginning.  The fact that the cliffhanger upset me so, I suppose, is a testament to how much I have loved these books so far.  Which also might explain why I tend to have a harder time reviewing books I love so much…I just find it hard to avoid gushing…and I’m afraid I won’t be too successful here.

I will try my best not to spoil any major plot points from Dead of Winter, but events from the previous two books will be hard not to mention.  Be forewarned…

The Arcana Chronicles has been a real whirlwind of a ride so far.  Evie and Jack have survived an apocalypse that has also seemed to usher in some supernatural elements with it.  It’s a supernatural contest that also resembles Survivor and The Hunger Games.  As you can imagine, life has not been very easy for our favourite Arcana representatives lately.

Since she learned that she was the personification of The Empress that you would find in a deck of Tarot Cards, Evie has discovered and learned some interesting things about her powers, her former reincarnated selves and about the ‘game’ in which she is an unwilling participant.  She is determined to change the course of the game this time around as killing the other representatives of the major arcana is not very appealing to her—she actually likes some of them—but can she deny her ‘inner Empress’ that is tenuously caged up within her and go against what inherently feels right and irresistible and embrace her seemingly heartless alter ego…the Red Witch, who is bent on annihilating everyone and winning the game?  It’s a constant struggle for her, along with her dangerous surroundings.

But Evie remains a heroine I want to root for.  She started out privileged and naïve, but continues to grow in strength (physical and mental), determination and knowledge.  When the challenges she faces seem insurmountable, she manages to still keep a semblance of a sense of humour…reminding us that she is still a teenage girl carrying a lot of weight on her shoulders.  Learning the game as she muddles through has not made survival an easy thing but with the help of some friends (and some who are more than friends), she’s on her way to getting what she wants.  But does she know all that she wants?

I know love triangles are overplayed in young adult literature, but I am still a fan of a GOOD one…one that splits me right down the middle and I suffer in deciding whose team I’m on as bad as the heroine does.  Well, the two love interests vying for Evie’s heart in this story, Jack and Aric (aka Death), have me in such turmoil, I totally get Evie’s despair in making a choice…but what girl wouldn’t envy her just a little bit, too?

Jackson is the rough-around-the-edges Cajun boy from the wrong side of the tracks, and is the only non-Arcana player (I have theories about his status) who is willing to do anything within his power to protect Evie.  A vow he made to her mother in the first book is one of the vows he intends to keep despite the constant forces threatening to tear them apart.  As we got to know Jack throughout the story so far, we have seen his evolvement into a really good leader despite his lack of supernatural abilities.  He is street-wise and has a keen sense for reading people. His fierce protectiveness of Evie is swoon-worthy, along with his adoration of her as they overcome a plethora of obstacles.  His affections would be very hard to resist.

Another one whose affections have proven hard to resist would be Death’s.  Death (his real name is Aric) has won the last three games, and as the winner, has retained his immortality and memories.  There is a special supernatural connection he shares with The Empress that inevitably draws Evie and him together.  In previous games, however, he has had to kill her because of her treacherousness and betrayals.  In this game, Evie is not at all like the other Empresses and he is determined to overcome his trust issues with her and win her heart because she literally is the ONE true girl for him.   Aric is polished, and exudes confidence.  And who can resist such a dashing guy dressed in black armour?

Perhaps it’s also not so far-fetched that these two pursuers of Evie’s heart find some common ground, and that is another factor that muddled my feelings for both of them.  Both men are good for her, and both could be bad for her.  You will see what I mean when you read this story as both relationships are far from simple and clear cut.

By the end of this third instalment, most of the players (the Major Arcana) have been identified.  Some have already been eliminated, because with some, there was just no chance at an allegiance.  Some were opportunistic and some were just very likable.  Strong character development is a huge selling feature to me in a story…and Kresley is one of those authors who have mastered it.  She also paints pictures with her words…I can visualize just about everything from the characters to the settings.

The story so far has been chock full of intensity, passion, adventure and gut-wrenching decisions and outcomes…to say that I couldn’t put this down would be an understatement.  Which is why I need the next book…like NOW!

Can Evie convince her rival loves to work together? Their survival depends on it in this third book of #1 New York Times bestselling author Kresley Cole’s Arcana Chronicles, a nonstop action tale of rescue, redemption, and a revenge most wicked.

Heartbreaking decisions
Evie was almost seduced by the life of comfort that Death offered her—until Jack was threatened by two of the most horrific Arcana, The Lovers. She will do anything to save him, even escape Death’s uncanny prison, full of beautiful objects, material comforts…and stolen glances from a former love.

Uncertain victory
Despite leaving a part of her heart behind with Death, Evie sets out into a perilous post-apocalyptic wasteland to meet up with her allies and launch an attack on the Lovers. Such formidable enemies require a battle plan, and the only way to kill them may mean Evie, Jack, and Death allying. Evie doesn’t know what will prove more impossible: surviving slavers, plague, Bagmen and other Arcana—or convincing Jack and Death to work together.

Two heroes returned
There’s a thin line between love and hate, and Evie just doesn’t know where she stands with either Jack or Death. Will this unlikely trio be able to defeat The Lovers without killing one another first...?