Book Review: The Invasion of the Tearling 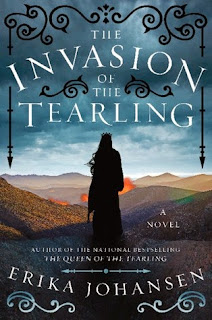 As I write my review, I am still shaking my head on what I just read.  I had no real idea on just where the sequel to The Queen of the Tearling would go, but I certainly didn't see most of this coming.

Yes, we knew that the story would pick up where the first left off, with an imminent invasion on the doorstep of the Tear courtesy of the Red Queen and her Mort army.  This invasion was a slow burning reminder throughout most of this book, but several other sub-plots were developing alongside.  I will say that few authors can handle these complexities but Ms. Johansen did so extremely well, in my opinion.

I said this before in my review for The Queen of the Tearling (here), that somehow, the author successfully meshes two genres--fantasy and dystopian--into one very original story.  This entire story takes place in the future.  Three to four centuries in the future to be exact.  But in Kelsea's world with Keeps and castles, and guards with swords, and magic...it has all the feels of a medieval fantasy.  But there was an in-between that we had a brief glimpse of in the debut novel.  In this second installment, we learn much more of the (dystopian) world that predated--and precipitated--The Crossing, which is maybe 40 years ahead of our (the reader's) present day.

The retelling of the pre-Crossing era was cleverly achieved through visions that Kelsea found herself experiencing in a very detailed, dream-like state.  In these visions, we meet a new integral character in Lily.  The world in which Lily lived was something that I dearly hope we do not ever get to see.  It's a miserable existence where a President has absolutely power over his people through enforced marshal law.  'Big Brother' is everywhere.  The privileged are separated by walls from the poor.  But their life of being controlled is no better.  Men are now running the show, with their wives basically just adornments and baby-making machines, and abused at their every whim.

It was hard to see the significances, but as the parallel stories were told (pretty seamlessly, I might add), we started to see the correlations...with more questions in need of answers as well.

Back in the Tearling, Kelsea took on her role as Queen with no holds barred.  The enormity of the situation at hand was indeed very overwhelming for Kelsea but I admired her ability to think outside of the box and look at the big picture, while trying to find elusive solutions to her monumental problems.  Heady responsibilities like these would change anyone, but with Kelsea, it changed her in many ways.  She not only went through a physical metamorphosis that seemed to be magically enhanced, but a personality change too. I'm not sure how I felt about her going through this change.  As well, her inner yearnings felt very awkward and a bit out of character to me, but I believe that was tied in with this peculiar transformation.  I still adored her spunk and a-bull-in-a-china-shop ways but as her physical, intellectual and personality changes took place, I liked her a bit less. But I am not giving up on her either.

Old favourites return including Kelsea's protectors--the Queen's Guard--Mace and Pen and crew, along with Father Tyler who was another character that I felt a great deal of affection toward...a kinship with...in his love for books and his faith.

There were a number of characters I expected to see more of that didn't happen, though, and I can't help but feel a bit let down by it.  Maybe they will have bigger roles in the final book?  I'm guessing so...but with this author, you just don't know what she has in store.

As much as the Red Queen remains Kelsea's biggest perceived threat, other villains (a couple in particular) emerged in this installment that gave new meaning to the words corrupt and evil.

I will also note that there were very dark and mature themes in this book.  While not gratuitous, there were scenes of extreme violence and rape--not fully explicit--but enough that I would caution sensitive individuals and wouldn't recommend for younger readers.

Overall, I really enjoyed this story.  This story, so far, is definitely getting an "A" for originality and a "B" for everything else.  It was hard to put down and I am anxious for the final book in the trilogy.  Thank you to the publisher for providing an advance copy through TLC Book Tours in exchange for my honest review.


With each passing day, Kelsea Glynn is growing into her new responsibilities as Queen of the Tearling. By stopping the shipments of slaves to the neighboring kingdom of Mortmesne, Kelsea has crossed the brutal Red Queen, who derives her power from dark magic and who is sending her fearsome army into the Tearling to take what she claims is hers. And nothing can stop the invasion.

But as the Mort army draws ever closer, Kelsea develops a mysterious connection to a time before the Crossing. She finds herself relying on a strange and possibly dangerous ally: a woman named Lily, fighting for her life in a world where being female can feel like a crime. Soon Kelsea herself begins to change; she does not recognize either her reflection in the mirror or the extraordinary power she now commands. The fate of the Tearling—and that of Kelsea's own soul—may rest with Lily and her story, but Queen Kelsea is running out of time.

In this second volume of the compelling trilogy begun with her bestselling The Queen of the Tearling, Erika Johansen brings back favorite characters and introduces unforgettable new players, adding exciting layers to her multidimensional tale of magic, mystery, and a fierce young heroine.

Erika Johansen grew up and lives in the San Francisco Bay Area. She went to Swarthmore College, earned an MFA from the Iowa Writers' Workshop, and eventually became an attorney, but she never stopped writing.

Wednesday, July 15th: A Dream Within a Dream