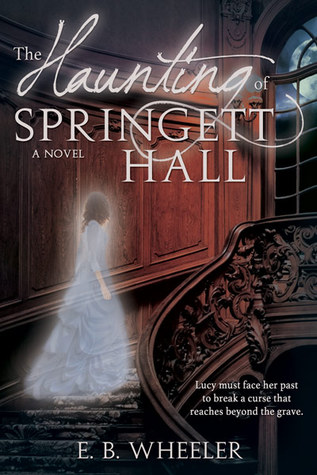 I love ghost stories and good well written love stories. When the two are combined I am unable to stop myself from reading them. I loved The Haunting of Springett Hall from the very first page. The story intrigued me. Not only is it a ghost story and love story, it is also a mystery.

The book opens up in Victorian England with Lucy, an 18-year-old girl waking up and realizing immediately that she is a ghost. It's pretty obvious when she can see through herself. She takes that pretty well in stride until she realizes she can't remember who she is or where she is or how she died. So begins her quest to find out the truth. She soon meets a young man, Philip, who can see her, the only person so far who can. Strangely enough he can't remember who he is either, but they find themselves inexplicably drawn together. They band together to figure out who they are, how they are connected, and what happened to make them lose their memories. Strange things begin to happen throughout the manor causing everyone to believe it is haunted, but not by Lucy. Lucy and Philip realize that to protect the new-found relationship budding between them, they must face forces darker than they could ever imagine.

I can only repeat again that I love this story. It had me laughing, crying, gasping, rooting silently for victory, and even sitting on the edge of my seat as I read to the conclusion. There are so many different tales the author has borrowed from, either on purpose or accidental, and meshed seamlessly into one book. Besides the obvious ghosts, there are also hints of lycanthropy, witch craft, and necromancy, and even aspects from Swan Lake.  Surprisingly, they work well together in this story.

The story touches on weaknesses and strengths, and what we would still take with us into the afterlife. Lucy and Philip both have to face their own weaknesses to survive and continue on. I love the way Wheeler shows this in her writing and I admit, it makes me stop and think about what I would carry with me into the afterlife. Even though both Lucy and Philip have lost their memories, they still hold true to the beliefs and habits that have been a part of them their whole lives.

The entire book is set inside the manor and on the manor grounds, but it all flows very well. You don't miss the movement most books have, the going from place to place even if it's just in one town. Here each room would be like a different shop, business, or house in a small town. It's intriguing to think about.

I quite enjoyed reading about Lucy and Philip and hope that there are sequels in the future so I can continue to follow them on their next quest. And if there are no more sequels, I can respect that and read new stories from the author instead.

One Last Thought: The language is for the most part modern, and the spelling is American. Being set in Victorian England, even in a manor such as this, you would expect a bit more formalness to the language. And if I had written it, I would have wanted to use British terminology and spelling, but that is a minor thing and my own personal opinion. It doesn't detract from the fabulous story.

Favorite Thing About This Book: I can't really think of one thing that I truly loved over anything else in the story. The story itself was brilliant, I loved the romance and the paranormal and the bravery these two characters showed in the face of not just evil, but also their own faults.

First Sentence: Light drew me back from oblivion.

Eighteen-year-old Lucy doesn't know how she became a ghost, but the more she remembers her life in Victorian England, the more she wants to forget. Her only hope of changing the mistakes of her past is to enlist the help of a servant named Philip—the one living person who can see her. This impossible romance story is filled with delightful period detail and abounding mystery.