Book Review: Bringing Down the House 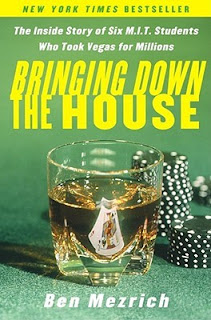 Buy it at Amazon, Barnes & Noble, and Indiebound.

If you've seen the movie that is based on this book, 21, you know the story. An elite group of super smart MIT students use math and card counting to become high-rolling millionaires on the Vegas strip, only to have their world come crashing down in dramatic, Hollywood fashion. The movie was great, but the book, as is the case so often, delivers so much more.

The first thing I'll mention about this title is the debate as to it's authenticity. There are claims that Mezrich took liberties with characters, stories, and historical events in his retelling of the MIT Blackjack Team. Most names in the book have been changed, some people are composites of several individuals (notably the team's leader, Mickey Rosa who is a composite of three people), and some facts and figures have been inflated. But the truth is, I don't care, they book was a great read and it's not likely anyone is using it as a research paper source. ;)

Ben Mezrich does a masterful job giving entry to a world of theft, glamour, money, and power centered around young student Kevin Lewis who is invited to join the MIT Blackjack Team. As the team gets larger, more experienced, and bolder, they take casinos for millions and the book leaves readers in awe of the naivety of the casinos AND the players. Great story that reads like a suspense/thriller at it's best.

The last thing I'll mention in this review is, though I am a HUGE fan of audiobooks, I don't recommend this book on audio. The intricacies and web of characters, plots, and frankly, the math, don't lend themselves to an audio read. After I switched to a paperback copy, I enjoyed the story so much more.

It's Friday night and you're on a red-eye to the city of sin. Strapped to your chest is half a million dollars; in your overnight bag is another twenty-five thousand in blackjack chips; and your wallet holds ten fake IDs. As soon as you land in Las Vegas, you are positive you are being investigated and followed. To top it all off, the IRS is auditing you, someone has been going through your mail -- and you have a multivariable calculus exam on Monday morning. Welcome to the world of an exclusive group of audacious MIT math geniuses who legally took the casinos for over three million dollars -- while still finding time for college keg parties, football games, and final exams.In the midst of the go-go eighties and nineties, a group of overachieving, anarchistic MIT students joined a decades-old underground blackjack club dedicated to counting cards and beating the system at major casinos around the world. While their classmates were working long hours in labs and libraries, the blackjack team traveled weekly to Las Vegas and other glamorous gambling locales, with hundreds of thousands of dollars duct-taped to their bodies. Underwritten by shady investors they would never meet, these kids bet fifty thousand dollars a hand, enjoyed VIP suites and other upscale treats, and partied with showgirls and celebrities.
Handpicked by an eccentric mastermind -- a former MIT professor and an obsessive player who had developed a unique system of verbal cues, body signals, and role-playing -- this one ring of card savants earned more than three million dollars from corporate Vegas, making them the object of the casinos' wrath and eventually targets of revenge. Here is their inside story, revealing their secrets for the first time.
Master storyteller Ben Mezrich takes you from the ivory towers of academia to the Technicolor world of Las Vegas, where anything can happen -- and often does. "Bringing Down the House" launches you into the seedy underworld of corporate Vegas -- deep into the realm of back rooms, ever-present video cameras, private investigators, and the threats and tactics of pit bosses and violent heavies. Equipped with twenty different aliases and disguises, the group of young card counters struggles around these roadblocks to live the high life -- until one fateful day when Vegas violently follows them home to Boston. Suddenly, there can be no more hiding behind false identities; the high life folds like a bad hand of cards.
Filled with tense action and incredibly close calls, "Bringing Down the House" is a real-life mix of "Liar's Poker" and "Ocean's Eleven "-- and it's a story Vegas doesn't want you to read.