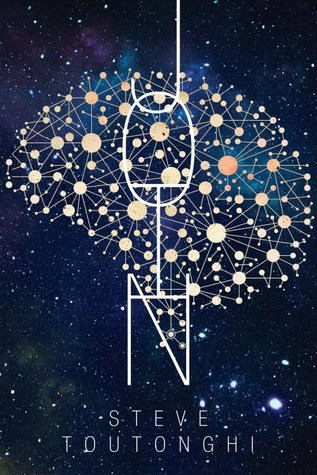 
Can you imagine merging with other human beings?  Not marriage, not a Vulcan mind meld, but actually becoming one in mind, soul, consciousness?  That’s what the new Join technology can do for you.  What’s more, besides the near immortality of course, is that the new merged consciousness gets to keep using the bodies of the people that Joined.  One Joined consciousness, multiple bodies through which to experience and interact with the world.  What could possibly go wrong?

Join, by Steve Toutonghi, is exactly the high-concept science fiction I adore.  Lots of philosophical conundrums attend the new technology.  How does Join change the relationship of humanity to the natural world?  How does it change the relationships between the Joined and those who choose to remain solo?  What happens when a corporation basically becomes the government?  Reading this book made me feel like I felt the first time I read some of Arthur C. Clarke’s earlier stories like Childhood’s End or Tales from the White Hart.

Join is grown-up science fiction.  Toutonghi throws readers into the deep end and hopes that we’ll be able to at least keep our heads above the water as we are inundated with the multiple perspectives of the novel.  Most of the main characters are Joined, and therefore have multiple bodies (called drives) operated by a single consciousness.  It does take some work to keep track of which drive is doing what in which location, but if you’re not afraid of a novel that makes some demands of the reader, Join is absolutely worth the effort required to understand the action.  If you’ve read Ancillary Justice, by Ann Leckie, you’ll have some idea of what this is like, though the multiple perspective concept is much more pervasive in this novel.

My one reservation about Join is that the two main characters, Chance and Leap, don’t have much of a character arc over the course of the story.  Chance and Leap are each composed of five Joined people.  Presumably, the more drives a Join has, the less each new Joined consciousness affects the whole (if personalities work mathematically, that is).  But I like to see protagonists really grappling with issues in a novel as philosophical as this one, and I felt like although they each went through a great ordeal neither of them ended up changing to any significant degree.  It’s unclear to me whether the flattish character arcs are because the characters are Joins, or whether character change was less important to the author than the philosophical issues of the story.

Steve Toutonghi has written a compelling debut novel that will make you question what you think you know about the nature of death and the relationship of people to the planet we live on.  Although this story stands well on its own, there are a few loose ends that make me hopeful for a second novel in this storyline.

What if you could live multiple lives simultaneously, have constant, perfect companionship, and never die? That’s the promise of Join, a revolutionary technology that allows small groups of minds to unite, forming a single consciousness that experiences the world through multiple bodies. But as two best friends discover, the light of that miracle may be blinding the world to its horrors.
Chance and Leap are jolted out of their professional routines by a terrifying stranger—a remorseless killer who freely manipulates the networks that regulate life in the post-Join world. Their quest for answers—and survival—brings them from the networks and spire communities they’ve known to the scarred heart of an environmentally ravaged North American continent and an underground community of the “ferals” left behind by the rush of technology.
In the storytelling tradition of classic speculative fiction from writers like David Mitchell and Michael Chabon, Join offers a pulse-pounding story that poses the largest possible questions: How long can human life be sustained on our planet in the face of environmental catastrophe? What does it mean to be human, and what happens when humanity takes the next step in its evolution? If the individual mind becomes obsolete, what have we lost and gained, and what is still worth fighting for?