Skip to main content
Labels
Posted by Reading Lark May 20, 2016 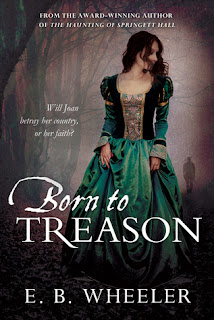 The reign of Elizabeth I is not a good time to be either Catholic or Welsh; Joan Pryce knows by experience that it’s even harder to be both. When her father dies after being tortured for his beliefs, Joan is forced by her Protestant cousins to move in with her godparents. Eager to honor her faith and wanting to do what she can for her people, young Joan agrees to deliver some pages of a Welsh translation of the Bible to an illegal Welsh press. Further steps into the world of political and religious intrigue quickly follow the first until Joan is confronted with a life or death choice for herself and others.


The strength of Born to Treason is in its historical detail. Wheeler’s writing easily evokes the contrast between the beautiful landscape and the ugly political and religious friction of the English Reformation. In the stories I’ve read, it’s usually high-born Protestants fighting against the corruption of the Catholic Church. Flipping that narrative and making the story about honest Catholic subjects affected by the laws of the English Reformation automatically created a compelling story. Wheeler also avoids the pitfall of giving her female character more freedom than would be realistic in that period of history. Joan is a strong, brave young woman committed to do right, but everything she does is still within the social confines of her day. I love that the author gave Joan difficult choices to make, and that, even though her heart is in the right place, her actions are not without consequences.

Though I quite enjoyed Born to Treason, I wanted it to be longer. I really like reading stories where things are not as they seem, and more intricacy and intrigue in the plot would have been possible given more space. It also would have made room to better develop the secondary characters who, for the most part, seemed one dimensional. Additionally, I wish Joan had had more insults at her disposal than goose-brained, nit-brained, etc. Some good Welsh invectives would have been in order.

Readers should note that although the main character is devoutly Catholic and frequently refers to her religion and calls on various saints, the book itself is not preachy so don’t let the religious theme throw you off. Born to Treason is a good, thought-provoking read with just a touch of romance.

Joan Pryce is not only a Catholic during the English Reformation but also Welsh, and comes from a family of proud revolutionaries. But when a small act of defiance entangles her in a deadly conspiracy, a single misstep may lead her straight to the gallows. Now, Joan must navigate a twisting path that could cost her life, her freedom, and her chance of finding love.