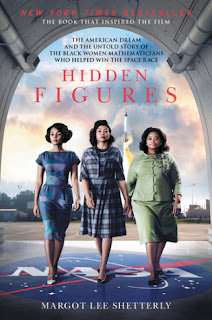 During the early years of the aviation and aerospace industries, computers were people – terrifically talented people who did the most complex math using mechanical adding machines and slide rules. At NACA (the forerunner of NASA), this job was taken over by women during WWII when many men were in the war. In the face of segregation, a large group of these women were African American. Hidden Figures tells the story of four of these women’s contributions to the war effort and to winning the race to the Moon.


When I first heard about this title back in August, I jumped at the chance to review it. I love learning about behind-the-scenes history. I mean, astronauts are great and all; I even wanted to be one when I was a kid. But it takes the best efforts of a lot of people to put a person in space. These women not only delivered on that, they had to face daily discrimination on the basis of both color and gender in order to do it.

Hidden Figures fascinates, yet maintains accessibility and relatability because of the way Shetterly weaves in information about the cultural and political climates and the specific ways in which Dorothy Vaughan, Mary Jackson, Katherine Johnson, and Christine Darden faced and surmounted the challenges in front of them: segregated cafeteria tables, a “colored” bathroom” preposterously distant from an assigned work group, not being allowed into various work meetings where they could reasonably make a contribution. Reading this book, I was continually amazed at not just the brain power of the West Computers (as their original work group was known), but also their grace under pressure. The only things that might have made the reading experience better for me are organization charts for the different time periods (war years vs. 50s for example) and maybe some pictures of these American heroes.

Hidden Figures is an important contribution to history for more than just telling the amazing stories of these smart black women who helped the US definitively win the space race. This book is a necessary one for all of us who grew up with the wonder of the space program and had still never heard of them, because of the way the history books of our youths overlooked minorities and women. It points to lacunae in the history we think we know and the educations we received. I fervently hope that Ms. Shetterly continues her research into more hidden figures of American history and writes more books about them!

Set against the backdrop of the Jim Crow South and the civil rights movement, the never-before-told true story of NASA’s African-American female mathematicians who played a crucial role in America’s space program—and whose contributions have been unheralded, until now.Before John Glenn orbited the Earth or Neil Armstrong walked on the moon, a group of professionals worked as “Human Computers,” calculating the flight paths that would enable these historic achievements. Among these were a coterie of bright, talented African-American women. Segregated from their white counterparts by Jim Crow laws, these “colored computers,” as they were known, used slide rules, adding machines, and pencil and paper to support America’s fledgling aeronautics industry, and helped write the equations that would launch rockets, and astronauts, into space.Drawing on the oral histories of scores of these “computers,” personal recollections, interviews with NASA executives and engineers, archival documents, correspondence, and reporting from the era, Hidden Figures recalls America’s greatest adventure and NASA’s groundbreaking successes through the experiences of five spunky, courageous, intelligent, determined, and patriotic women: Dorothy Vaughan, Mary Jackson, Katherine Johnson, Christine Darden, and Gloria Champine.Moving from World War II through NASA’s golden age, touching on the civil rights era, the Space Race, the Cold War, and the women’s rights movement, Hidden Figures interweaves a rich history of scientific achievement and technological innovation with the intimate stories of five women whose work forever changed the world—and whose lives show how out of one of America’s most painful histories came one of its proudest moments.