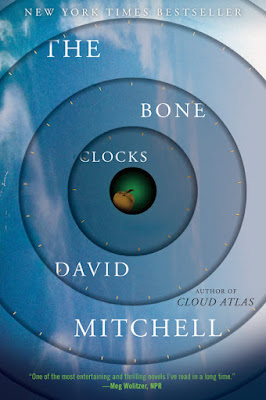 Holly, a psychically sensitive child, can hear the voices of others she calls "the radio people."  Although a doctor is able to dampen her sensitivity, throughout her life she remains a subject of interest and interference to two groups of immortals: the Anchorites who survive on the psychic energy of others, and the Horologists who wish to stop them.

As with his earlier novel Cloud Atlas, David Mitchell created an unusual book structure through which to tell his story. The Bone Clocks is a novel in six parts, told by five separate narrators in six different decades.  The first and last sections are told by Holly herself.  The rest are the stories of others who have had an impact on Holly's life: an almost boyfriend, her life partner, a fellow author, and the doctor who temporarily halted Holly's psychic abilities.

The Bone Clocks had been on my reading list since it won the World Fantasy Award in 2015.  It book was also considered for the Man Booker Prize in 2014.  Having read and fallen in love with Cloud Atlas, I was surprised that I didn't like The Bone Clocks more than I did.  Don't get me wrong, the writing was good and the characters interesting, and Mitchell comes up with the most unusual metaphors. It was just that the changing viewpoints prevented me from connecting viscerally with the story or with Holly.  There is just so much going on in this book that I think I would have preferred it either broken out into several books, or more focused on the eons long enmity between the Anchorites and the Horologists.

Still, if you are a fan of Cloud Atlas, or enjoy books with unusual structures, give The Bone Clocks by David Mitchell a try.  It could be the book for you!

Following a scalding row with her mother, fifteen-year-old Holly Sykes slams the door on her old life. But Holly is no typical teenage runaway: a sensitive child once contacted by voices she knew only as “the radio people,” Holly is a lightning rod for psychic phenomena. Now, as she wanders deeper into the English countryside, visions and coincidences reorder her reality until they assume the aura of a nightmare brought to life.

For Holly has caught the attention of a cabal of dangerous mystics—and their enemies. But her lost weekend is merely the prelude to a shocking disappearance that leaves her family irrevocably scarred. This unsolved mystery will echo through every decade of Holly’s life, affecting all the people Holly loves—even the ones who are not yet born.

A Cambridge scholarship boy grooming himself for wealth and influence, a conflicted father who feels alive only while reporting from occupied Iraq, a middle-aged writer mourning his exile from the bestseller list—all have a part to play in this surreal, invisible war on the margins of our world. From the medieval Swiss Alps to the nineteenth-century Australian bush, from a hotel in Shanghai to a Manhattan townhouse in the near future, their stories come together in moments of everyday grace and extraordinary wonder.