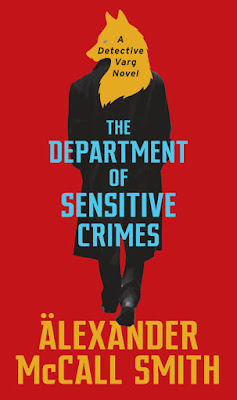 Ulf Varg and Anna Bengsdotter are part of a team of detectives working for the Malmö police's Department of Sensitive Crimes.  Over the course of the novel, they investigate a series of bizarre cases involving some benignly twisted human behavior.  Jealousy and personal drama take center stage in this satirical police procedural.

I admit that I was not 100% sure of what I was getting into when I started this novel.  I had read and enjoyed some of the Number 1 Ladies Detective Agency series, and was intrigued by the cover of this latest book.  Would the main character turn out to be a werewolf? (No.)  Would wolves somehow play a prominent part of the story? (No.)  Despite my incorrect assumptions, I had fun with the book nonetheless.

The Department of Sensitive Crimes is a satire on the increasingly popular Scandi noir style of crime fiction.  But where Scandi noir can be bleak and depressing, Smith's book is lighthearted and surprisingly gentle.  Smith makes nods to his source material:  a detective is named Blomquist (reflecting Blomqvist in the popular Millenium series by Stieg Larsson), and detective Varg is divorced (a possible reference to Henning Mankel's Wallander).  There are other references that I've missed because I haven't read any Scandi noir books, and only know what I've picked up tangentially from movie and TV ads.

Despite my unfamiliarity with Scandinavian crime fiction, The Department of Sensitive Crimes kept my attention and I never felt as though I didn't understand what was going on.  This book brought a clean and simple sensibility to crimes that emerged from jealousy and social fear.  If you like Alexander McCall Smith's other series, or if you are a fan of Scandi noir, I highly recommend this book!

In the Swedish criminal justice system, certain cases are considered especially strange and difficult, in Malmö, the dedicated detectives who investigate these crimes are members of an elite squad known as the Sensitive Crimes Division.

These are their stories.

The first case: the small matter of a man stabbed in the back of the knee. Who would perpetrate such a crime and why? Next: a young woman's imaginary boyfriend goes missing. But how on earth do you search for someone who doesn't exist? And in the final investigation: eerie secrets that are revealed under a full moon may not seem so supernatural in the light of day. No case is too unusual, too complicated, or too, well insignificant for this squad to solve.

The team: Ulf 'the Wolf" Varg, the top dog, thoughtful and diligent; Anna Bengsdotter, who's in love with Varg's car (and possibly Varg too); Carl Holgersson, who likes nothing more than filling out paperwork; and Erik Nykvist, who is deeply committed to fly fishing.

With the help of a rather verbose local police officer, this crack team gets to the bottom of cases other detectives can't or won't bother to handle. Equal parts hilarious and heartening, The Department of Sensitive Crimes is a tour de farce from a true master.