Book Review: The Only Thing Worse than Me is You 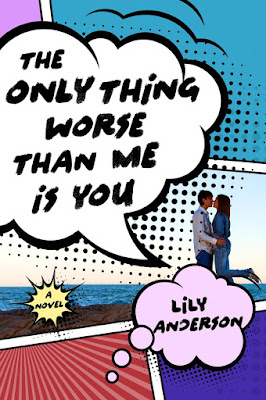 The Only Thing Worse than Me is You
By: Lily Anderson
Published By: St. Martin's Griffin
Publication Date: May 17, 2016
Page Count: 352

Buy it at Amazon, Barnes & Noble, or IndieBound
Source: library
YA — romance

I’ve read and reviewed a number of modern Austen and Bronte adaptations, but this is the first time I’ve done a modern Shakespeare tribute.  I absolutely loved it!  Cover to cover, this book is full of both reverence for the Bard as well as clever updates to Much Ado about Nothing, one of my favorite plays.  Trixie is short for Beatrice and Ben sometimes gets called Benedick in attempts to irritate him. If you’re familiar with Much Ado about Nothing you can see where this is headed: lots of hilarious insults traded back and forth between the two of them, as they slowly begin to soften toward each other.

I love that Anderson really cuts to the heart of what makes gifted and geeky teenagers interesting characters.  The dichotomy between their advanced thinking and their often still-young, can’t-quite-see-past- their-own-noses emotional intelligence fuels much of the conflict in the story.  Trixie’s obsession with besting Ben academically is rooted in a 1st grade playground incident.  Harper and Cornell have been interested in each other for years, but can’t quite get the relationship off the ground without a little push from their friends. All this in the high stakes environment of a prestigious private school where kids battle for their monthly published academic rank, the updated equivalent of the wars.

Even though the plot is based on Much Ado about Nothing, don’t worry if you’re not familiar with the Shakespeare play.  You’ll still enjoy the book just fine; knowing the play just adds another layer of humor and anticipation. The Only Thing Worse than Me is You totally stands on its own as a work of fiction. The characters are vivid and entertaining, and the plot, though recycled, actually works more believably for high schoolers than it does with adults. I also love that Anderson set the story in a high school for gifted kids and gave them all sorts of nerdy hobbies and fandoms.  And even the adults have some good lines like this one from Harper’s father when the girls are talking about how much work they have to do: “Better busy than bored.  Idle nerds become supervillains.” (p. 170)

So, do yourself a favor and don’t become a supervillain, read The Only Thing Worse than Me is You this spring instead!

Trixie Watson has two very important goals for senior year: to finally save enough to buy the set of Doctor Who figurines at the local comic books store, and to place third in her class and knock Ben West--and his horrendous new mustache that he spent all summer growing--down to number four.

Trixie will do anything to get her name ranked over Ben's, including give up sleep and comic books--well, maybe not comic books--but definitely sleep. After all, the war of Watson v. West is as vicious as the Doctor v. Daleks and Browncoats v. Alliance combined, and it goes all the way back to the infamous monkey bars incident in the first grade. Over a decade later, it's time to declare a champion once and for all.

The war is Trixie's for the winning, until her best friend starts dating Ben's best friend and the two are unceremoniously dumped together and told to play nice. Finding common ground is odious and tooth-pullingly-painful, but Trixie and Ben's cautious truce slowly transforms into a fandom-based tentative friendship. When Trixie's best friend gets expelled for cheating and Trixie cries foul play, however, they have to choose who to believe and which side they're on--and they might not pick the same side.

Labels: 5 Birdies Aimee Book Review Lily Anderson St. Martin's Griffin The Only Thing Worse than Me is You